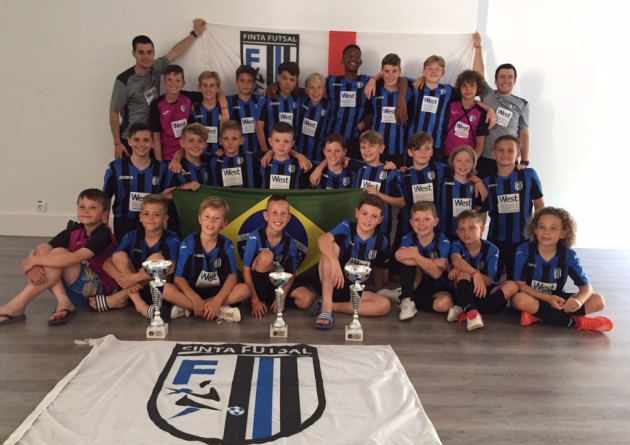 There was plenty of success for Upminster’s Finta Futsal at the Mareseme International Cup, with all three of their sides entered in the event reaching their respective age-group finals. The competition, which was held in the Spanish city of Barcelona, attracted teams from across Europe.

Finta under-10s were crowned overall winners in their group after a superb show of resilience. The youngsters comfortably eased through the opening group stage, before defeating CFS Manent Santa Coloma 4-0 in the semi-finals. On the morning of the final, Finta were dealt a blow when their regular keeper was ruled out through illness, with outfield players Reece Lowe and Rubin Phillips having to fill in.

Finta went behind early on in the final and seemed to be heading for a devastating defeat, only for Phillips to net an equaliser in the final minute. With the match now being decided by penalties, Lowe saved the decisive spot kick to hand his team the win. The under-12s also won their age group following a string of impressive performances in Spain.

Finta again made it through the group stage with ease, and did not even concede a goal, before producing a 4-1 in the semi-finals. The youngsters took an early lead in the final, before opponents Maristes Sants-Les Corts levelled. However, Ollie Eagles’ second goal of the final proved decisive as the under-12s triumphed 2-1. The under-14s, meanwhile, had to second for runners-up spot in the age category, despite some strong displays. Despite losing their opening group game, Finta progressed to the semi-finals where they won on penalties after their match FS Tordera ended 1-1. However, the final against AE Bellsport proved one game too far for Finta as they lost 5-1.

For all three teams to reach their respective finals was still a huge achievement, something which Finta coach Diego Pagliuso recognises.

“This is probably our best achievement as a club. To take three teams to Barcelona and get all three to the final is brilliant for all the players,” he said.

“I’m extremely proud of their achievements and it shows the progression in this country regarding futsal.”