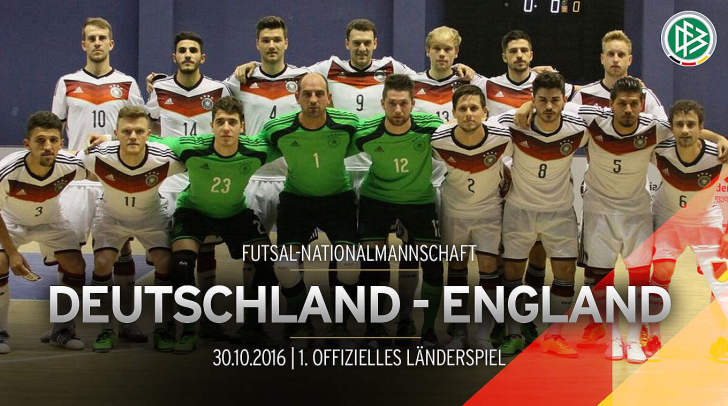 The first official international matches of the national futsal team against England will be played on 30 October and 1 November 2016 at the Island Park Hall in Hamburg. Sport1 will broadcast the games live on TV.

Hamburg and Futsal, this passionate relationship is experiencing a historical occasion on 30 October at the Island Park Hall when the first official international match of the German national futsal team will take place: Germany v England, a football classic for many decades will now be a futsal duel between two ambitious nations.

It was only in December 2015 that the DFB  established the  Futsal National Team after various camps to identify the first pool of players. In mid-September and mid-October Germany coach Paul Schomann invited his squad to two training camps. “The potential is clear to see,” said the coach.

This potential needs, in thecoming weeks and months, to bring to fruition as successful start for  the national futsal team. Two days after the first international match, both nations will compete for a second time (Tuesday, November 1 from 18 am). Both games will be broadcast by Sport 1 live on TV.

While the anticipation is rising for the first two official internationals, DFB already set the course for the future. The association expects the Futsal National team to qualify for the European Futsal Championship in Slovenia in 2018.

Tickets for Futsal matches in Hamburg will be available in August.