Kazakhstan Football Federation: ‘Our goal is to qualify for the elite round of the 2020 World Cup’ 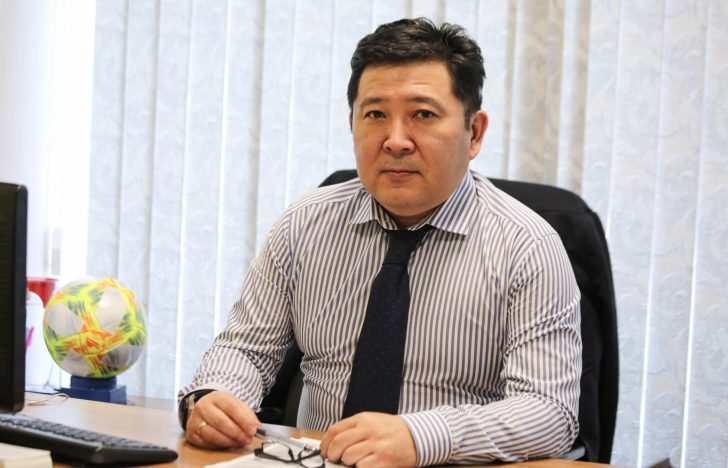 The director of the Kazakhstan Football Federation (KFF) Futsal Department, Askar Abildayev, spoke about the tasks of the Kazakhstan national futsal team and commented on unsatisfactory results of the youth team in the European Championship qualifying tournament.

What are the criteria for participating in the Futsal Championship? And how many foreigners can play?

According to the regulations, four foreign players are allowed to take part in this Championship. Otherwise, a football club has to pay for every other foreign player. According to the regulations, it is also allowed that all four players can play at the same time. I would like to note that next year it is planned to reduce the number of foreigners from four to three players.

Are you planning to increase the number of participants in the Kazakhstan Futsal Championship?

Yes of course. We are holding meetings with regional leaders. For example, for the next season, Akim of the Mangystau Region, Yeraly Tugzhanov, instructed FC Caspy to create an efficient team based on the club that will represent such a rich futsal region. Negotiations are also underway to create a futsal club in North Kazakhstan.

Each city of Kazakhstan has its own amateur futsal leagues, with a large number of amateur players. Do you supervise such teams?

Yes, of course, we supervise all of the tournaments that are held in Kazakhstan. In addition, amateur teams have the right to declare as part of two professional players. Actually, there are many cases when players from amateur teams have moved to professional futsal clubs. As an example, some amateur footballers play in Okzhetpes from Kokshetau and Inzhu from Aktobe.

What can you say about infrastructure in Kazakhstan futsal? What cities are allowed to host the matches of the national futsal team, except Almaty?

The capital ‘Barys Arena’, SC ‘Kazakhstan’, ‘Alau’ and some other venues. The fact is that futsal parquet is imported and installed in a certain area, which allows you to hold competitions of any level in different arenas. Currently, modern futsal sports facilities are being built in Atyrau and Aktau. The ‘Zhastar Hall’ and ‘Amanat Arena’ in Karaganda. ‘Ayat-Arena’ in Rudny and SC ‘Konys’ in Aktobe. In terms of infrastructure, things are not bad. 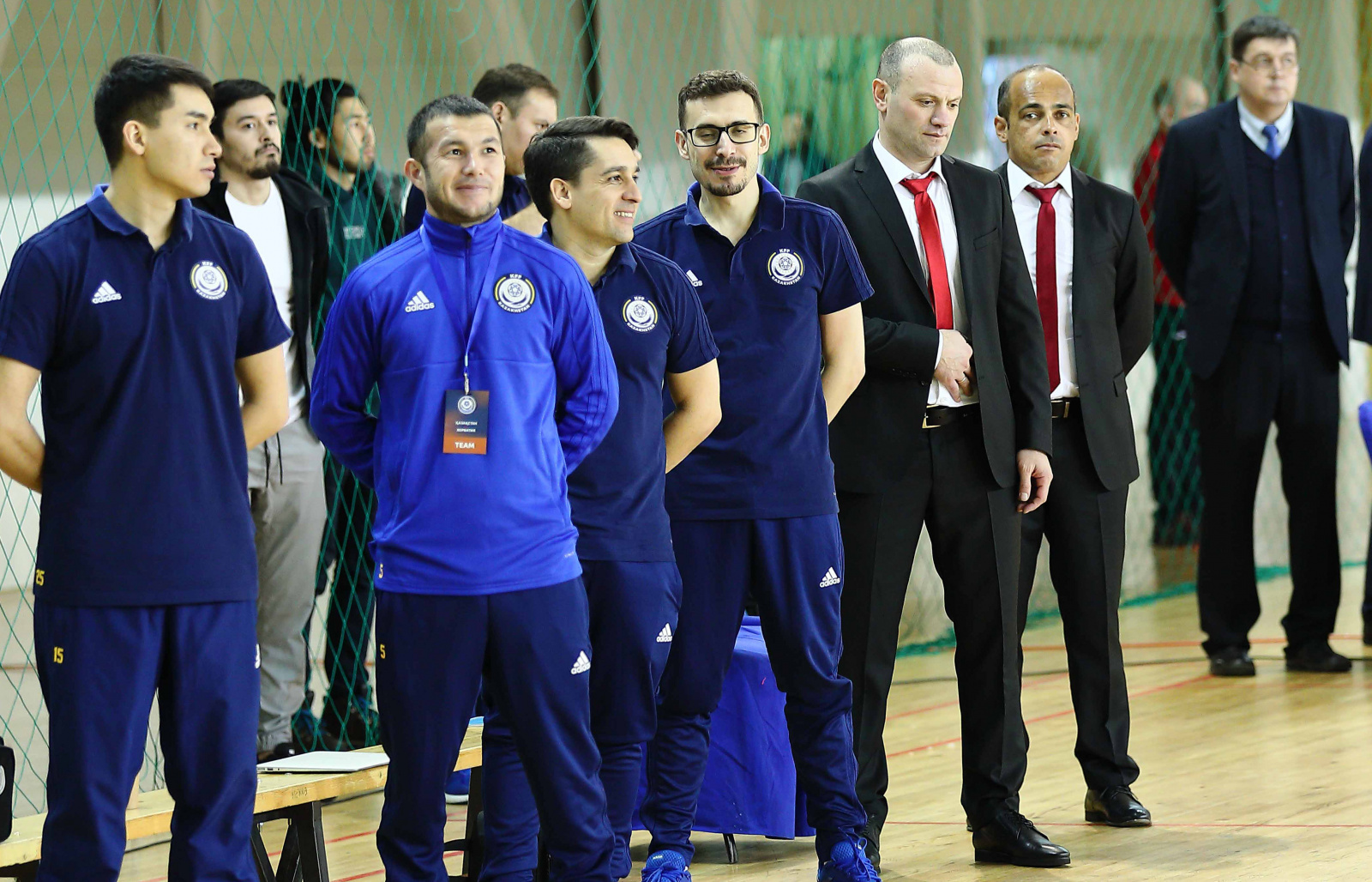 Why was Kaka appointed as head coach of the national team?

First of all, Kaka as a player had a great career in good clubs, including in Russia, where futsal is also developed. He is a multiple winner and winner of this country’s championship. Therefore, he is fluent in Russian and can communicate his thoughts and demands to the players in a clear and competent way. His coaching experience at Gazprom-Ugra, gives a very positive assessment of his qualities as a mentor.

Moreover, Kaka’s approach to the development of children’s and youth futsal is admiring – he pays great attention to this aspect. As soon as he headed ‘Kairat’, a reserve team was opened on the basis of the Almaty club. Kaka regularly conducts master classes for the younger generation. It’s a pleasure to deal with him.

In addition, he did not come alone. His assistant, Sergey Koridze, who in his time twice became the vice-champion of Europe and the best scorer of the European Championships at the beginning of 2000, works with him.

They do their best and improve the training process as a whole. I think this coaching tandem is one of the strongest in Europe.

What are the goals and objectives set before the national team in the qualifying round of the World Cup 2020?

Our goal is to qualify for the elite round. We can do it. Our team will play with the teams of Romania (hosts), the Netherlands and Albania. The two best teams on the basis of the matches of the main stage will qualify for the elite round. At the end of July, a two-week training is planned. In September, we will play in the Caspian Cup in Astrakhan, with the teams of Azerbaijan, Iran, and Russia. 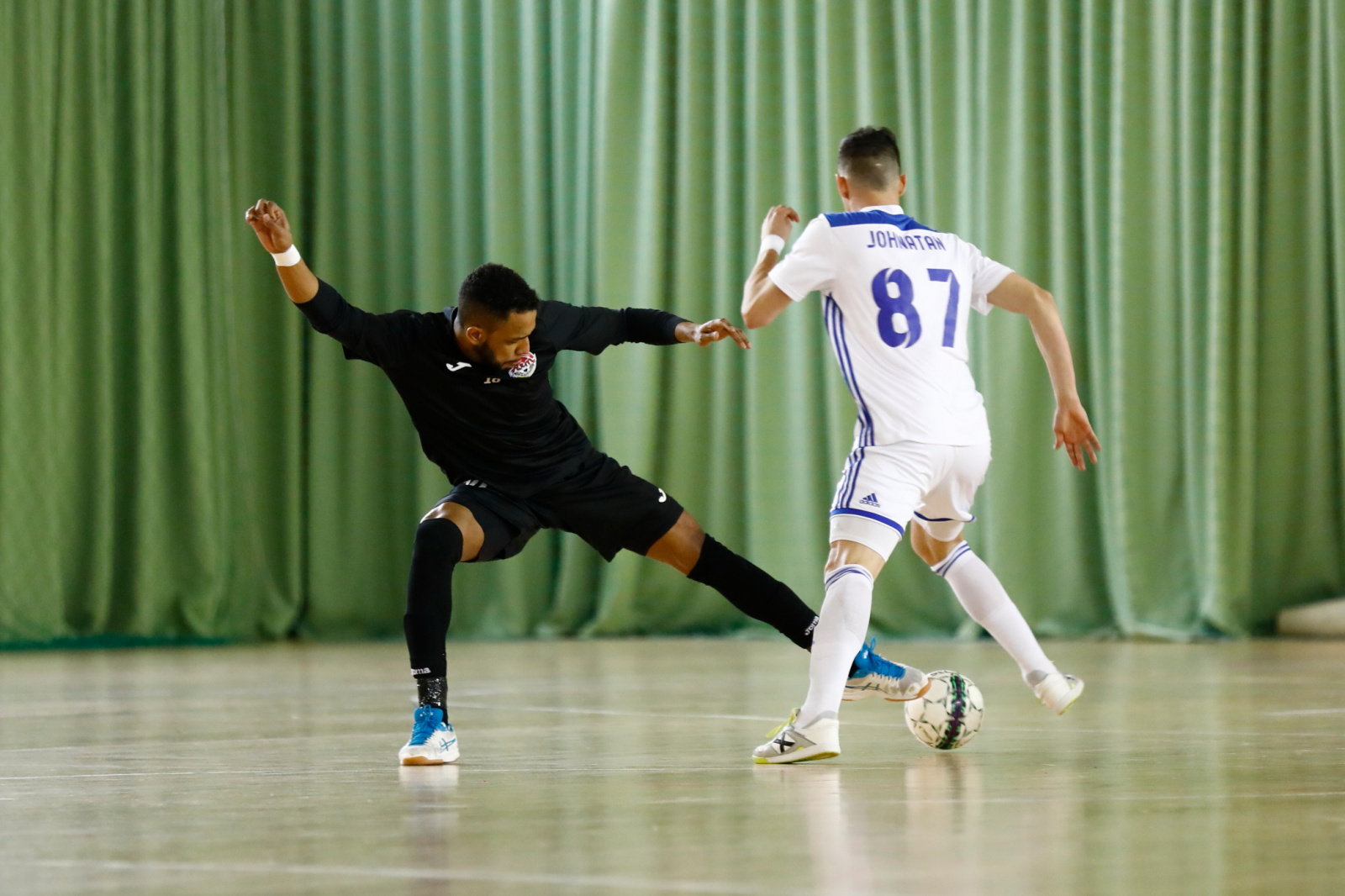 What can you say about foreign players in the Kazakhstan national futsal team?

Let’s start with the fact that they are citizens of Kazkhstan. Higuita and Douglas are main players of the national team. They do their best in each game. Douglas is recovering after this last injury but he already played in the matches with the Croatian team and fought bravely for Kazakhstan. To play for Kazakhstan really means a lot for both of them.

Taunan has a relapse injury. In February, when there were friendlies with the Croatian national team, the coaching staff of the national team decided to wait a bit. However, wherever he is and for whatever club he plays, Kazakhstan national team is a priority and this team will always be home for him. He is ready to play at any time. The question of Leo remains open. 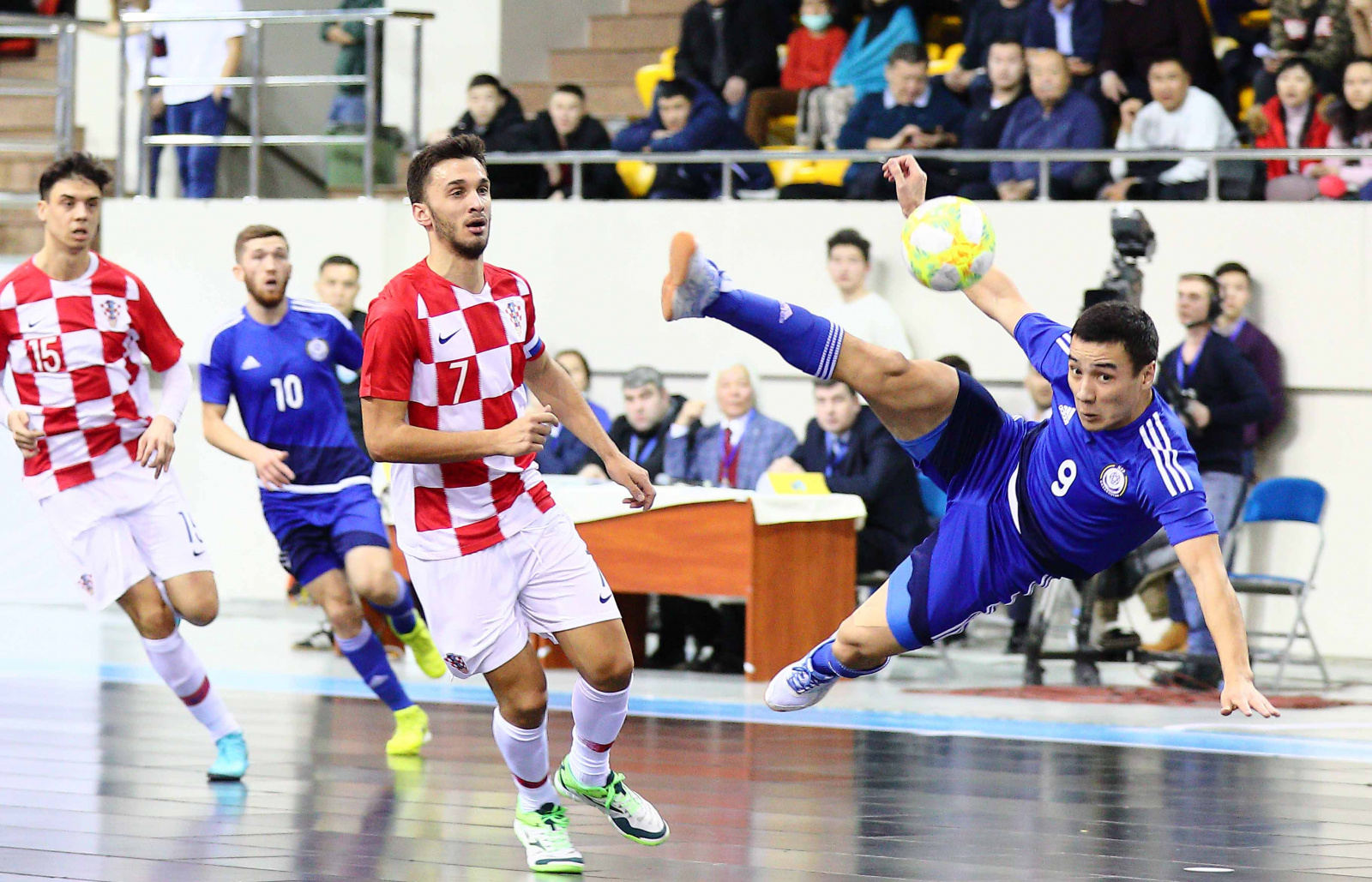 Many futsal fans are interested in why Amirzhan Mukanov was not invited to work in the structure of your department?

After my appointment as a director of the Futsal Department in September last year, we offered him a job, but he refused.

Is it possible to host the final stage of the World Cup or European Championship in Kazakhstan?

At the end of last year, the Kazakhstan Football Federation submitted an official application for hosting the European Championship-2022. Now we are in constant correspondence with UEFA to submit all the necessary documents and fulfill all the requirements. In our application, it was indicated two cities – Nur-Sultan and Almaty. Approval of the application is not a quick process. Now there is only the first stage, in May the second one will take place. In addition to Kazakhstan, six more countries have applied for hosting this tournament.

The student futsal team of Kazakhstan achieved a good result at the World Championship. Who collected this team? 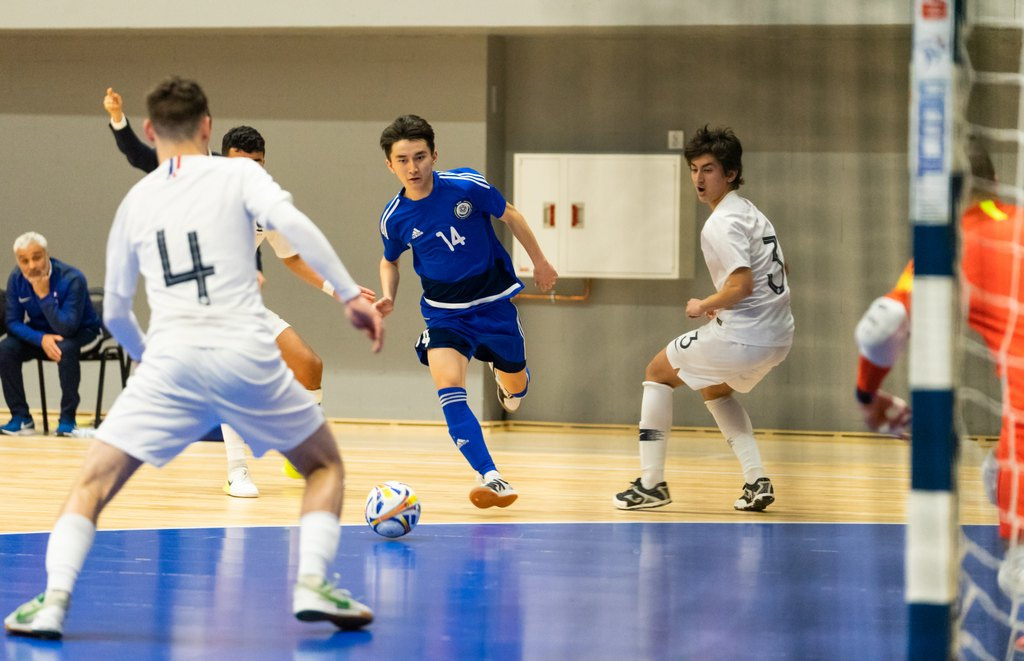 The Kazakhstan U19 team completed its performance at the Euro 2019 qualifying tournament. We are disappointed with the results. What can you tell about this situation?

This squad of the Kazakhstan U19 played for the first time. The main players play for Kairat, Ayat, and Inzhu. Our young players, first of all, have a lack of international experience. We realise this problem and are looking for solutions. For example, starting next year, we plan to hold a regular competition among teams under 17 years old. The national team needs reserve in the face of talented players. Because, if we compare football and futsal, it is easier to start from futsal and then play football, but it is more difficult to start playing futsal if you previously were engaged in football. There are factors – coverage, other muscle groups work, the difference in training and the intensity of the game. It is also necessary to form the correct psychology of young football players because this fact plays a big role. Our guys are not psychologically ready to play against the teams of France, Poland, and Finland.

We have some talented young players, but we would like our teams to give them more game practice, to gain more experience and confidence.

What can you say about the Kazakhstan U19 team’s head coach Kanat Tanakpayev?

Kanat Tanakpayev – head coach of the Ayat team. They have already won silver medals of Kazakhstan, Championship. During the last five years, championships and various tournaments among the youths of 2000 were held in Rudny, so he knows all the candidates well. His assistant, Semyon Palagutin from Kairat, is considered one of the most promising young coaches in Kazakhstan.

Source of the article the Kazakhstan Football Federation website