The University of Nottingham Mens team lost to arch-rivals Nottingham Trent but the women’s team brought home the coveted title.

The University of Nottingham Women’s Futsal team triumphed 2-1 on penalties yesterday evening, to make it 3-1 in the Varsity series in favour of UoN. The game finished 0-0 after a pulsating affair, which was only denied a goal thanks to the brilliance of both goalkeepers. However, it was the home side who held their nerve when it came to penalties and they were able to claim a valuable point in the series.

Trent, who were victorious in last year’s Women’s Futsal match, were perhaps weakened by the loss of one of their star players in Notts County’s Laura O’Neill, who missed the match through injury. Elizabeth Ejupi was also a major loss for the home side and is a significant doubt for the Football Varsity on the 12th May.

The first half was a very even affair, with University of Nottingham getting lots of shots away, but they were unable to find a way past Aja Aguirre in the Trent net, who came up with some top saves to deny Lindsay Morgan and Kayla Kret.

The first half was a very even affair, with University of Nottingham getting lots of shots away, but they were unable to find a way past Aja Aguirre in the Trent net, who came up with some top saves to deny Lindsay Morgan and Kayla Kret. 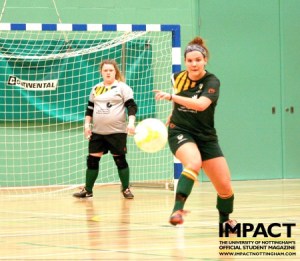 However, it was Trent who came closest to opening the scoring when a powerful shot from range was brilliantly tipped on to the bar by home keeper (who is also a goalkeeper for UoN Hockey), Pete Lendon.

The hero for the home looked in inspired form to deny the away team, coming to the rescue with important blocks on numerous occasions. Morgan also saw a shot trickle just past the post as UoN pushed to try and get the opener, but they were ultimately denied by a combination of poor finishing and brilliant goalkeeping and defending from the Trent team. 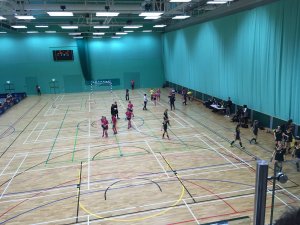 The second half saw a slight switch in the proceedings, as it was Trent who began to dominate possession. However, excellent counter-attacking play still saw UoN create plenty of chances to take the lead. 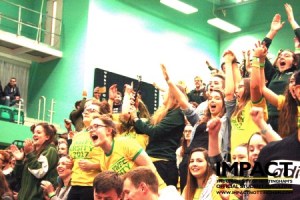 Katie Gray hit wide after brilliant inter-play saw her played through on goal, whilst Erin Owen hit the post after a clever free-kick from Nicole Butterfield gifted her teammate acres of space inside the box.

Trent’s play very much revolved around their talented number 8, Camilla Newton, and her skillful play created several chances for her teammates. However, they were ultimately unable to put them away, with Charlotte Stegges firing just wide, whilst Charlotte Broad should have put Trent ahead but mishit her shot when she was found inside the area.

Both sides had late chances to win it but ultimately neither side was able to find a winner in normal time, which meant a lottery of penalties in the new £40 million David Ross Sports Village.

The University of Nottingham and Nottingham Trent teams both missed their first penalties. Cam Newton saw her strike thunder against the left-hand post. Trent and UoN then finally converted, via Lindsay Morgan for UoN, and it was Kayla Kret who was able to tuck away the winning penalty and claim victory for UoN, after Trent’s fourth effort was missed, which provoked scenes of ecstacy on the sidelines and in the stands.