Fifth edition of a Bahrain Futsal League hailed as a success 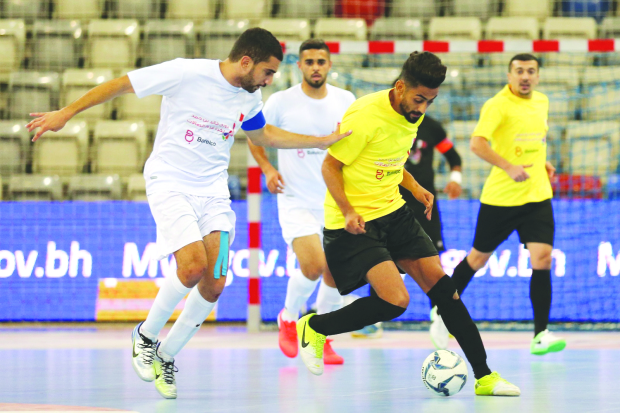 Omar Abdulaziz Bukamalthe Head of the Media Office of HH Shaikh Khalid bin Hamad Al-Khalifa praised HH Shaikh Khalid bin Hamad Al-Khalifa, First Deputy President of the Supreme Council for Youth and Sports and Honorary President of Bahrain Sports Federation for Disabilities for his continuous support to the Bahraini youth and sports movement through the initiatives launched by His Highness and providing the ideal environment for this vital sector to grow and improve.

Bukamal asserted that Khalid bin Hamad Futsal League for Youth Centres, People with Disabilities and Girls is one of the successful initiatives of His Highness that attracted the youth of various sector of the Bahraini society, including people with disabilities and female athletes.

Bukamal said: “The success of the fifth edition of the league reflects the great efforts exerted by the Organising Committee in all its branches and the implementation of all plans and programmes with precision and perfection. This has contributed to serving the objectives set by His Highness. This edition of the league was able to prove a great difference from the past versions in terms of organising, media coverage, awards, and public attendance, not to mention the active role played by the institutions and companies sponsoring the league.”

On his part, Nawar Al-Muttawa, Director of the Authorities and Youth Centres at the Ministry of Youth and Sports Affairs and Member of the Supreme Organising Committee appreciated the endless support of HH Shaikh Khalid bin Hamad Al-Khalifa to the activities attracting the local youth and athletes.

Al-Muttawa valued the care and patronage of HH Shaikh Khalid bin Hamad Al-Khalifa of the Bahraini youth and sports movement by organising events that invests in their energies and improves their skills and talents such as His Highness’s annual futsal league, reflecting his care about local sports and talents.

He also said that Khalid bin Hamad Futsal League has become one of the most popular sports events among the Bahraini youth, as it reflects the social and humanitarian initiatives of His Highness to strengthen cohesion and social bonds between the Bahraini youth who represent all of the areas, villages and towns of the kingdom, as well as integrating people with disabilities with all sorts of events and encouraging female athletes to engage in more activities.

He hailed the keenness of Supreme Council for Youth and Sports (SCYS) Deputy President and Bahrain Olympic Committee (BOC) President His Highness Shaikh Khalid bin Hamad Al-Khalifa on holding the Futsal League which engage different categories, including the expatriates’ contest.

Dr. Al-Ahmadi stressed the importance of the Futsal League in engaging the expatriate communities living in Bahrain as part of a programmed run by the Ministry of Youth and Sports Affairs.