Tonight is the night, the first-ever Men’s U19 UEFA Futsal EURO final!!! 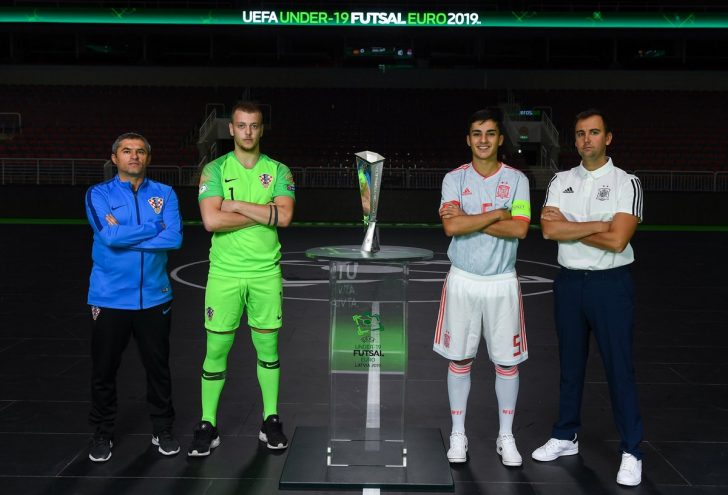 The UEFA Futsal U19 EUROs has been a resounding success, full of entertainment, drama, and talent

UEFA promoted the competition as having the Future Magicians but from what we have seen they are not the future, they are here today. Ricardo Lopes, Josip Jurlina, Bernardo Paçó, Tomás Paçó, Jakov Hrstić, and the list could go on and on. UEFA deserves all the applauds for launching this event which will no doubt continue to develop into a better spectacle year on year.

Croatia takes on Spain at 19:00 CET at the Arena Riga which you can watch live via UEFA.tv in the UEFA Futsal EURO U19 Final. Spain has already defeated their opponents at the group stage, 0-3, goals through Adrián, Antonio Pérez, and Gordillo.

Will Nacho Torres join the list of Spanish captains to have lifted a major?

“Croatia are really strong opponents and this will be a much tougher game than [Sunday’s 3-0 win]. We saw how Croatia played against Portugal.” Will Nikola Čizmić be the first captain of any Croatiateam to lift a UEFA trophy?

”We are looking forward to the match. Spain are one of the best teams in the world but we are ready for them.”

We will have to wait and see who lifts the trophy this evening for the first time in the competition’s history but the excitement and anticipation is building!!

You can keep up will all the development happening up to and during the competition by following UEFA Futsal Twitter via this link: http://bit.ly/2lTvoFe