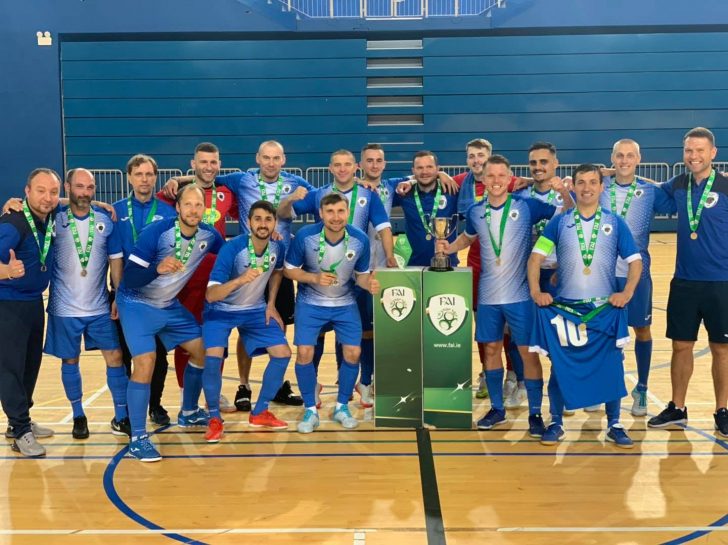 Belfast Sparta FC: “We believe that the IFA’s decision is unfair. We feel that that it was reached without adequate consultation and planning. However, our decision to withdraw is ultimately a practical one.”

For those who don’t know the geographical situation of the island of Ireland, the country was partitioned on the 3rd of May 1921, therefore the North is known as Northern Ireland and remains a part of the United Kingdom and the south is known as the Republic of Ireland. When it comes to the governance and development of both football and futsal there are two separate bodies called the Football Association of Ireland (FAI – South) and the Irish Football Association (IFA – North).

In the Republic of Ireland, you have to win the FAI Futsal Cup to secure your place in the UEFA Futsal Champions League. Blue Magic Futsal Dublin (main picture) defeated Saint Scholars 9:0 (2:0) and will represent the Republic of Ireland for the fourth time, the club made their first appearance in the competition in 2015-16 season.  The reason the league winners don’t secure the Champions League spot is due to the FAI not organizing a national league. A league competition for futsal is based in Dublin and is delivered by the AUL – Athletic Union League, however, the league does not have regional divisions but this could also be due to a lack of awareness or interest at this time. The association was the first nation in the British Isles to have a national futsal team but it has been suspended, though they continue to have a senior team for deaf futsal. Although this may be about to change, the FAI has been going through a difficult period in its history with the board and president being replaced and the association having to be financially assisted by the government. Now, the association is reviewing it strategies and development aims which will hopefully see futsal elevated as a priority for the governing body. At first, the likelihood is that the association will approach it from a player development tool for football players before it starts to promote futsal as a sport in its own right.

In Northern Ireland, the sport is organized and delivered at a different level, the Irish Football Association has embraced the sport at an international level, launching men’s and women’s national teams. Both teams have performed incredibly well for an early developing futsal nation, much to the credit of men’s head coach Jonathan Michael and the head coach of the women’s team Keith Gibson. To promote and develop futsal there is a national league and cup competition and is supported at the grassroots level with primary school and secondary school national competitions. However, though the association is doing well at an international level there is still a lot of work to be done at a domestic level. The sport’s development progress has been slowed down by the lack of suitable facilities and the league has received a lot of criticism on a range of issues relating to refereeing, marketing/ promotion among other issues, and COVID 19 hasn’t helped ease this situation.

The league holders are currently Belfast Sparta FC who represented the nation in the UEFA Futsal Champions League 2019-20, however, this will not be the case this year. The club published the following statement:

“Belfast Sparta FC are disappointed to announce their withdrawal from the proposed Cathedral Eye Clinic NI Futsal League play-offs.
On 31st July 2020, the Irish Football Association (‘IFA’) announced its decision to conclude the NI Futsal League season on an “average points per game” (‘PPG’) basis – a decision that most likely would have seen Sparta retain its title. The decision was reached following a lengthy consultation period with IFA’s ‘Coronavirus Response Group’ and the ‘Return to Grassroots’ Subgroup. However, only six days later, on 6th August 2020, this decision was reversed. The IFA then announced that the league would be concluded via means of semi-final and final ‘play-offs’.

Sparta was surprised and confused by this sudden ‘u-turn’. We outlined our objections to the IFA decision as follows:

i. Sparta is proud to be a multi-cultural team. A number of our players are abroad visiting family and not available to play, due to the very short notice of this decision and COVID-19 quarantine restrictions.
ii. We voiced concerns regarding potential conflicts of interest in the decision-making process.
iii. We noted the apparent lack of consistency with the IFA’s approaches to football and futsal. We note that the football leagues (an outdoor game which had been played lawfully for a number of months) were concluded on a PPG basis. Whereas the proposal for the futsal league, an indoor sport which has just ‘returned’, and which carries an inherently greater risk of COVID-19 transmission, is to be concluded via competitive matches.
iv. We noted that the IFA is the only national football association to conclude their futsal season on a ‘play-off’ basis. All other UK associations have concluded their futsal leagues on a PPG basis, or by cancelling them entirely.
v. We have sought, but not yet received, clarity on the advice the IFA received from UEFA on this matter. This appears to have been a fundamental factor in determining the current decision.

Sparta has been left with an inadequate number of outfield players to fulfil the fixture. To address this, we outlined two reasonable requests to the IFA that, should either be granted, would enable Sparta to compete in the fixture. Firstly, we requested the opening of the transfer window in a limited capacity, with immediate effect. We provided the IFA with a number of precedents on this approach from other UEFA countries; this a matter for national football associations, not UEFA or FIFA. Secondly, if this was not possible, we requested that the fixture date be moved (even just by one day), to enable some players to be available. We stated that if neither of these requests could be addressed, then Sparta would be forced to withdraw from the fixture.

Sparta is very disappointed to have to take this decision. We recognise the continued efforts made by Michael Boyd, Director of Football Development at the IFA, to address our requests. We are very grateful to him for this.  Ultimately, in light of the hasty IFA decision of 6th August, and the IFA’s inability to meet either of our reasonable requests, we have no alternative but to withdraw from the semi-final fixture against Belfast United on Sunday 16th August.

We believe that the IFA’s decision is unfair. We feel that that it was reached without adequate consultation and planning. However, our decision to withdraw is ultimately a practical one. It is based on the fact that we do not have adequate squad numbers to fulfil the fixture.
We regret that we will not be able to defend our title or, as a result, have the chance to compete in the Champions League next season. Indeed, when the IFA announced its initial decision to conclude on a PPG basis, Sparta proposed to the IFA that a ‘combined’ Northern Ireland team, made up of representatives from local futsal clubs, could be entered into the Champions League this year. In our view, this would have been fair and appropriate solution in this unprecedented league campaign.

We wish the best of luck to all of the teams competing in the play-offs. We look forward to taking to the futsal court again in the new season, once we believe it is safe and possible to do so.”

Here are the league standings before COVID-19 forced the league to be stopped: 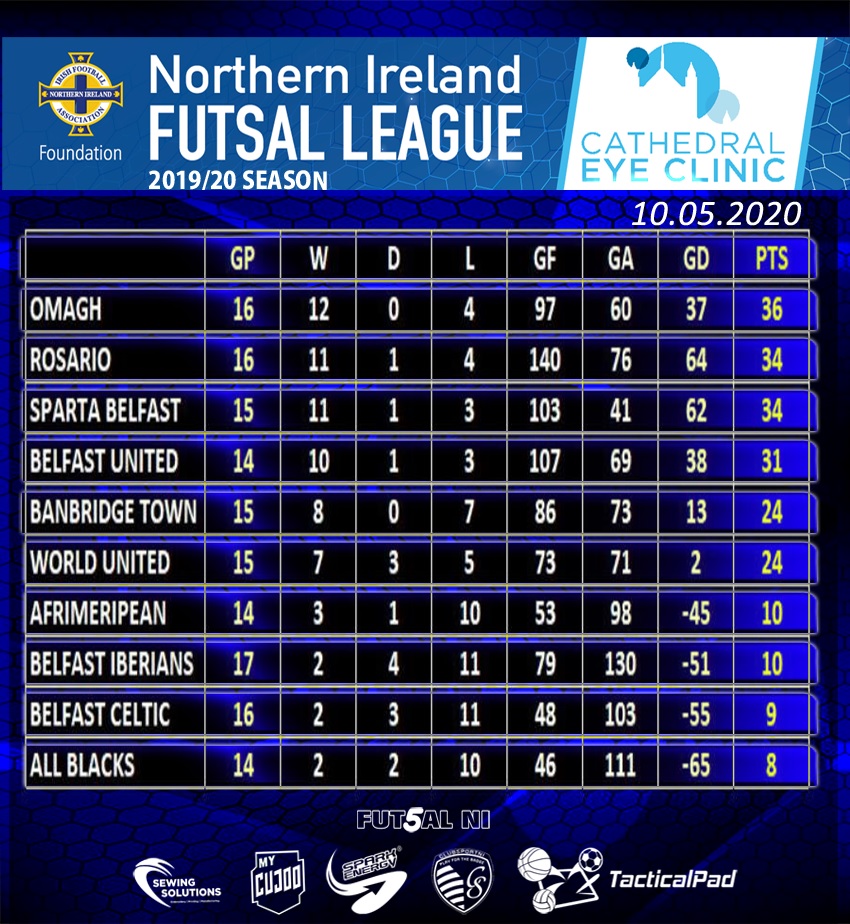 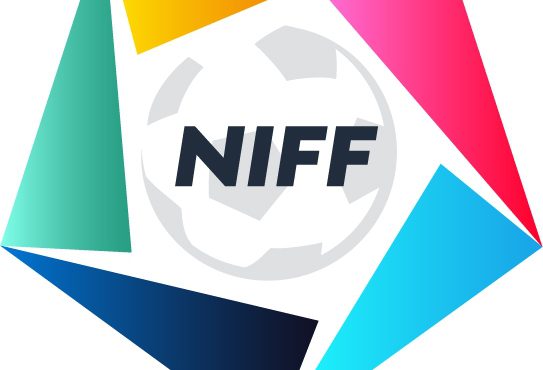 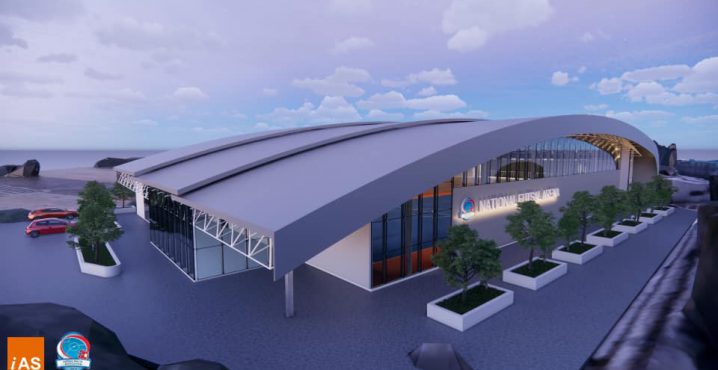