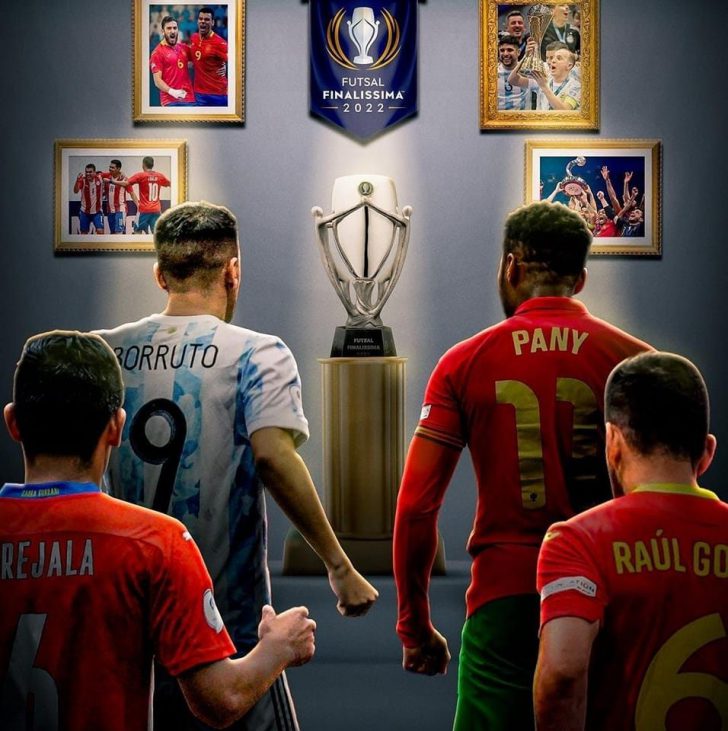 The Futsal Finalissima 2022 tournament is played by the winner and third placed team of the 2022 European Futsal Championship (Portugal and Spain) and the winners and runners-up of the 2022 CONMEBOL Copa América Futsal (Argentina and Paraguay), to determine who is the undisputed champion.

The four best futsal teams from Europe and South America will play a quadrangular tournament, which will take place at the Parque Roca Stadium with a capacity of 15,500 spectators, located in the southern area of ​​the City of Buenos Aires.  The competition kicks off on September 15 and 18, to crown the final winner of both continents.

This tournament is part of the existing collaboration between UEFA and CONMEBOL for the development of the sport beyond their geographical areas.  Tomás Paçó, a 22-year-old Portuguese international, believes the creation of these quality competitions helps the development of futsal: “It is a good tournament for the sport to continue to grow. Starting the season with a title in dispute is very positive. We want the sport to be Olympic, the more competitions of this level there are, the closer we will get to that goal”.

The Portuguese player also spoke about his teammate’s state of mind ahead of the competition: “We are very focused on our goals and on the preparation until the first game. We respect our opponents and we clearly know that the four teams start at the same level”, he added.

Regarding Paraguay, the fixed/ defender made a clear analysis, pointing to the preparation games held in September 2021, in Viseu: “It’s a very strong team, with that South American DNA. They are very focused on their game, they believe in each bid until the last. They are an organized team with technical quality. We have to be at our best level to be able to emerge victorious from this first game”, he revealed.

To counter this South American virtue, Tomás Paçó believes that Portugal must maintain its intensity: “Our team also has that intensity and the ability to fight to the end and dispute each ball as if it were the last. our game ideas and our identity. We respect all our opponents a lot, but we want to be successful in this competition. First of all, we have to overcome Paraguay, then we think about the other opponents. It will be a very demanding game”, he reiterated.

Who is playing in the Futsal Finalissima 2022
Portugal are the reigning European and world champions. They won Futsal EURO for the first time in 2018 and retained the title in Amsterdam in February, having only previously made the final once, in 2010. In the 2021 World Cup in Lithuania, Portugal claimed their first global crown, beating Argentina 2-1 in the final.

Paraguay were 2022 Copa América de Futsal runners-up as hosts, the fourth time they have reached the final (only once in the 13 editions have they not made at least the semis). They got to the 2021 World Cup round of 16, losing to Spain 4-0 in their group and going out 6-1 to Argentina.

Hosts Argentina won their third Copa América de Futsal in February (they have only failed to reach the final once in the last seven editions), having also twice won the separate South American FIFA Futsal World Cup qualifying tournament. They won the World Cup for the first time in 2016 and made the final again in 2021, losing to Portugal.

Spain were third at Futsal EURO 2022 (runners-up Russia are currently suspended). However, they have been the dominant team in UEFA competition, winning seven out of 12 Futsal EUROs, including the experimental inaugural tournament of 1996, and have never failed to reach the semi-finals. Spain won the World Cup in 2000 and 2004, and was runners-up to Brazil in 1996, 2008, and 2012. They lost in the 2021 quarter-finals to Portugal, who also defeated them in the EURO 2022 semis.

When is the Futsal Finalissima being played?

Where is the Futsal Finalissima being played?

The match is being played at Parque Roca in Buenos Aires, Argentina. Also known as Estadio Mary Terán de Weiss after the tennis player, it can hold up to 15,5000 spectators. Among events it has held are several Davis Cup matches and tennis at the 2006 South American Games for which it was built, with the retractable roof added in 2014.

How does the Futsal Finalissima work?

The Futsal Finalissima is a straight knockout event with the winners of the semis progressing to the final and the other two teams playing off for third place. Other than in the final, there is no extra time, so if those ties are level at the end of regulation time then they go straight to penalties. The final, if level after 40 minutes, will have two extra-time periods of five minutes each before a possible penalty shoot-out.

The FIFA disciplinary code applies to incidents occurring during the match. Red cards in the semi-finals lead to suspension in the final or third-place play-off. Otherwise, yellow and red cards are cancelled at the end of the tournament and are not carried forward to any other UEFA, CONMEBOL or FIFA competition.

Why has the Futsal Finalissima been introduced?

The match is part of the expansion of the cooperation between UEFA and CONMEBOL, which notably includes women’s football, futsal and youth categories, the exchange of referees, technical training schemes and the men’s football Finalissima game, which pits the winners of the UEFA European Championship against the Copa América holders. Argentina beat Italy 3-0 in the first edition of that competition in 2022. UEFA Youth League winners Benfica won 1-0 against Peñarol in the Under-20 Intercontinental Cup in front of a 40,570 crowd at Estadio Centenario in Montevideo, Uruguay, last month while a football Women’s Finalissima will also be played next year between England and Brazil.

Where to watch Futsal Finalissima on TV and online in Europe

Picking up on the point made by Tomás Paçó concerning quality competitions; a big problem for futsal is the abundance of competitions and their lack of organisational quality. These competitions have been created to provide regular futsal for national teams or for the best clubs, and to try and bring attention to the sport as well, all with the right intentions. However, pictures and broadcasting go around the world showing empty stadiums, the graphic designs are extremely poor, the marketing is weak, too many times futsal even at the professional level has been presented in an amateur way and this cannot continue. Hence, why this competition between UEFA and CONMEBOL is a step up in quality futsal needs but hopefully even they have given this event the financial support it needs, and the Argentina Football Association will support it with the resources it needs as well. We look forward to see what kind of impact this event will have.