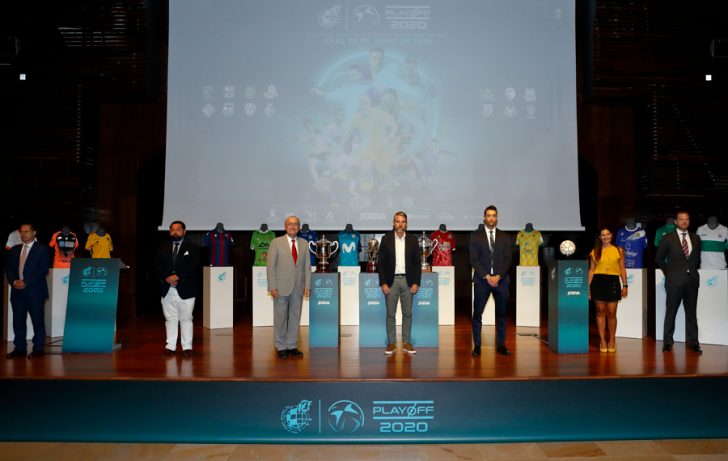 Malaga looking forward to a big week of futsal

Trade Fairs and Congress Center of Malaga has kicked off what will be a spectacular week for futsal. The futsal party began with the presentation of the end-of-season futsal play-offs, which will take place from June 23 to 30 at the José María Martín Carpena Sports Palace in the capital.

Malaga Trade Fair and Congress Center has hosted the presentation of the competition and in attendance were icons of the sport in Spain. In addition to the Mayor of the City, Francisco De la Torre, the councilor for Sports, Noelia Losada; the Vice President of the Malaga Provincial Council, Juan Carlos Maldonado; the General Secretary for Sports of the Andalusian Government, José María Arrabal; the head of women’s football and futsal for RFAF, Meritxell Rubio, and, on behalf of the Royal Spanish Football Federation, were attended by the secretary of the National Futsal Committee, Paco Sedano and Luis Amado, ambassador and institutional representative of the federation.

The presentation celebrations began with Francisco de la Torre, Mayor of Málaga, showing his joy at the fact that the city has been chosen to host a world-class futsal event: “We are delighted to be the capital of sport and host tournaments like this I am sure that, although the current situation will be different, the players will get a great impression of our city. ”

Francisco de la Torre: “We are delighted to host a tournament as important as these play-offs”

Juan Carlos Maldonado, vice president of the Diputación de Málaga, continued: “Sports events represent an opportunity, a showcase and an incentive for our economic recovery. In the Spanish Cup we had with us the best teams in the world and in these play-offs We will also be accompanied by women’s futsal teams. In Malaga futsal is deeply rooted and we are sure it will be a great show. ”

José María Arrabal, Secretary General for Sports of the Andalusian Government, emphasized the importance of the competition beyond sport: “I want to emphasize that sport has a decisive role to be an example for society. We must be able to infect us as a teamwork society that will be seen on the Martín Carpena track “.

After the representatives of the institutions, Paco Sedano, secretary of the RFFS CNFS took to the floor: “The Spanish Futsal Cup was a great success and we remember it with great affection. Today we are back with an important event and we should be proud that, after a difficult situation, Malaga offers us the opportunity to finish the national futsal competitions “. The venue and city wanted to positively influence this great week of futsal that is ahead of us, we thank them, the clubs and the institutions for their presence in Malaga for these play-offs.

Paco Sedano: “We want to thank clubs and institutions for their participation in this competition”

The best players in Spain in this sport will step on the Martín Carpena to put the finishing touch to an exciting season. From the European Capital of Sport 2020 will come the new champions of the Men’s First Division and Second Divisions along with the First Divisions for Women.