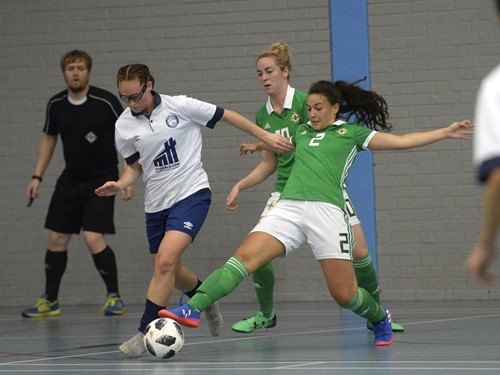 Manchester Futsal Women’s Club showed why they are the dominant club in Women’s Futsal in England against Northern Ireland.

The challenge matches played at Shankill Leisure Centre with the support of Belfast City Council, ended 4-2 and 5-1 to the visitors.

However, Northern Ireland team manager Keith Gibson was not too disheartened. He felt his fledgling squad could take a lot of positives from the games against the team who claimed the league and cup double in England this season.

He pointed out: “Manchester showed why they won everything on offer in English futsal this year. They were a well-drilled team, playing some super futsal and they proved too strong for our girls.

“It was good to see so many of the GAWA coming along over the two days to support the team and witness two good games of futsal as we continue to develop the game here in Northern Ireland.”

With regular Northern Ireland keeper Alice Harkness having a great weekend in nets for Manchester – they are her club side – goals were hard to come by for the home team.

In the first game, two of the new players in Gibson’s squad made their mark, with both Comber Rec’s Sarah McKillen and Derry City’s Shannon Dunne getting the ball past Harkness, who made several fine stops in both games.

In the second game, Comber Rec’s Olivia Brown scored from the penalty spot to pull the score back to 3-1. However, as Northern Ireland drove forward looking for further goals, they were caught on the break late in the contest and the Manchester pivot scored two wonder goals.

But he added: “It was nevertheless a great workout for the team as preparations continue for next year’s Euro qualifiers.”