Over 2,000 fans attend futsal final in Guyana between Sparta Boss and Bent Street 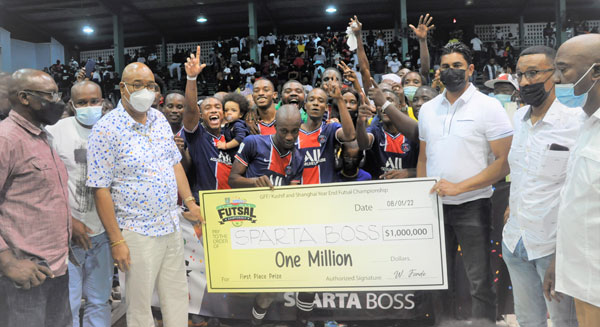 Pre-Tournament favourite Sparta Boss were made to work hard for 5-3 win on penalty kicks over Bent Street to take $1Million first prize and the title of first champions of the Guyana Football Federation, Kashif and Shanghai knockout Futsal tournament Saturday night at the Cliff Anderson Sports Hall.

The spirited Bent Street, led by the skilful and energetic Jermaine Junor whose second half goal made him the tournaments leading goal scorer, had to settle for the $500,000 runners-up prize in the thrilling finale of what has been eight nights of entertaining futsal. In the third place play-off between Gold is Money and Leopold Street, a brace from Jamal Pedro and a goal from Simeon Moore spearheaded Gold is Money to 3-1 win after leading 2-0 at half-time. Darron Niles netted the lone goal for Leopold Street. 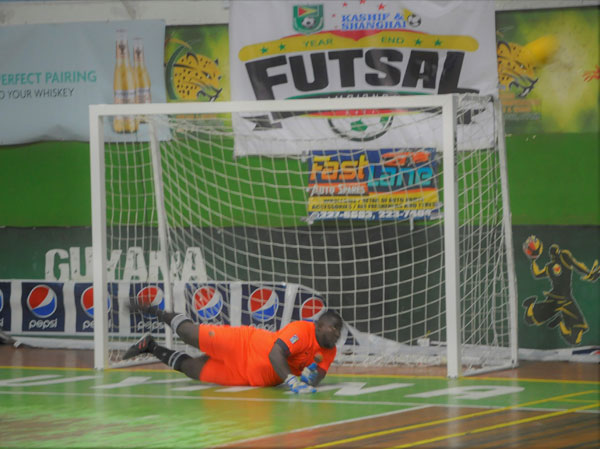 Devon The Wall Charles makes the Million dollar save in the penalty shootout. (Sean Devers photo)

For their third place finish, Gold is Money collected $250,000, while Leopold Street took $100,000. Sparta Boss Ryan Hackett, who scored a goal in each half of the riveting final which ended 4-4 at extra time, was named MVP of the finals and earned himself a Hero Motor Cycle. The other individual prises will be presented at a later date. The atmosphere was electric with the raucous sold out crowd, which included Politicians, prominent sporting personalities and singers Mandela who performed at the break and Abel Stokes sang Guyana’s National Anthem before the final and his version of Smile Guyana, had the crowd on their feet, nosily cheering on their teams. 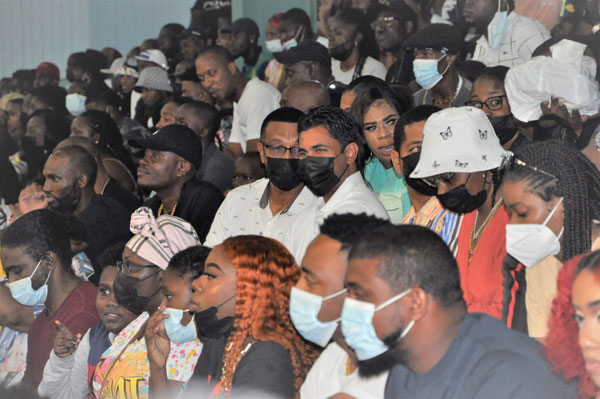 The aroma of Bar-B-Q Chicken in the air and pulsating dancehall music coming from the speakers in the Hall added to the entertainment of the Mask wearing capacity crowd of over 2,000. And when, in the wee hours of Sunday morning, the burly Devon Charles executed the million dollar save during the penalty shoot out to prevent a bullet like shot from Colin Nelson from scoring, pandemonium broke out as Sparta Boss supporters went wild with excitement and relief as their team collected the symbolic Cheque from Ministers Ramson Jnr and Edghill in the presence of Kashif Muhammad and Aubrey Shanghai Major. 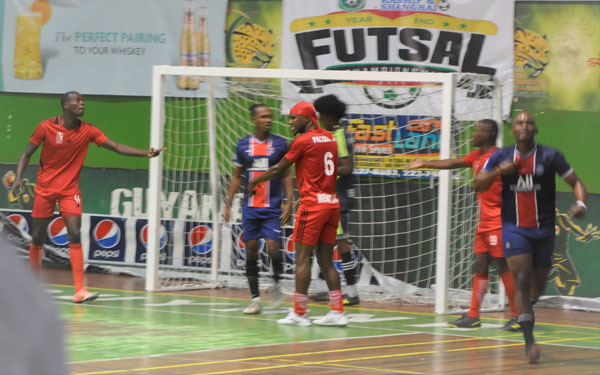 In the fourth minute of the final, Bent Streets Clive Nobrega powered a shot past Charles, (the most successful custodian in the tournament; conceding just 4 goals in 3 matches) to the joy of their fans and highly favoured Sparta Boss knew they were going to have a big fight for the first prize money. Three minutes later Hackett beat Omar Jones for the equaliser and the noise from the Sparta fans was deafening. However, several excellent saves by both goalies resulted in the first half, which produced entertaining futsal, ending 1-1 although Bent Street, fired up by the live-wire Junor, played the slightly better futsal. 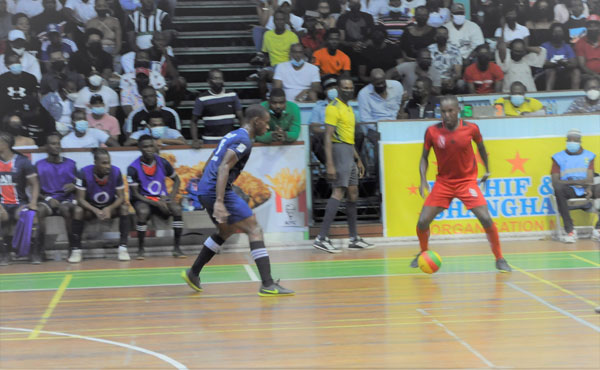 Early in the second half Hackett scored his second the of what was turning out to be a hard fought contest as Sparta Boss upped their intensity. Three minutes later, Junor scored his eighth goal of the tournament in fast paced battle to make it 2-all as both teams searched desperately for the winning goal, but, in a match of high quality Goalkeeping, full time ended with the teams level 2-2 on the electronic scoreboard. National player Gregory Jackie Chan Richardson opened the scoring for Sparta Boss in extra time before Pernell Schultz scored twice in quick time and Bent Street were sensing victory with them leading 4-3, They resorted the passing the ball around to eat up the remaining time. But, Sheldon Shepherd beat Jones seconds before the buzzer and with score 4-4 it was now down to a penalty shootout to decide who the inaugural champions would be. With the ram-packed Sports Hall on its feet, Shepherd took the first shot and scored for Sparta Boss, while Daniel Wilson beat a sprawling Charles. The roar of the pumped up crowd could be heard all the way in Bent Street and in Tucville when Colin Nelsons kick was saved by Charles, who was twice warned for coming out too far before the ball was kicked.

A penalty was also given as the ball appeared to hit the top of the left upright but the Referee deemed it had hit the inside post. While all five kicks penetrated Jones and just three beat, the Wall Charles, including the controversial one, it meant Sparta Bosses has emerged winners 5-3.

Jamal Pedro dribbles past the opposition to score his 2nd gold for Gold is Money in the 3rd place game which won 3-1. (Sean Devers photo)

President of the Guyana Football Federation, Wayne Forde, said the local governing body for the sport and its partner, the Kashif and Shanghai Organisation, take full responsibility for overcrowding at the final of the year-end Futsal on January 8 at the Cliff Anderson Sports Hall. 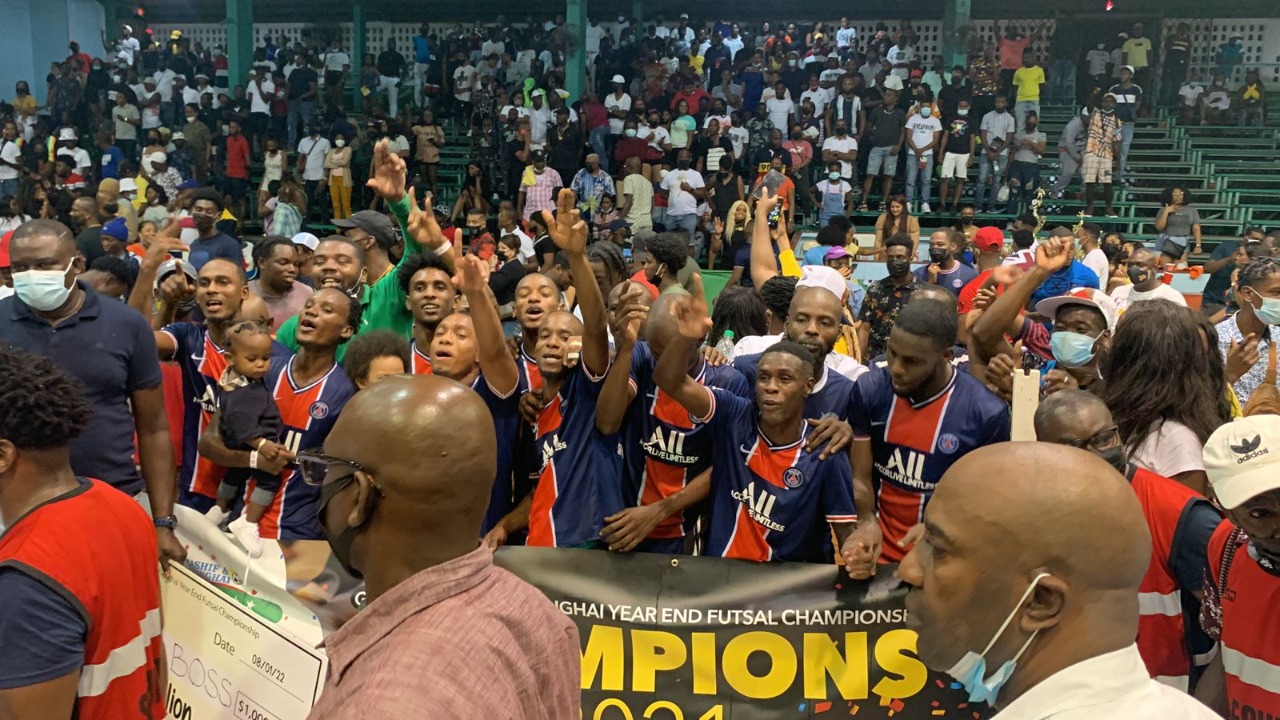 A massive crowd witnessed the final between Bent Street and eventual champions Sparta Boss in a clear breach of the COVID-19 protocols.

If you don’t know where Guyana is; it is a coastal northern country in South America and its neighbours are Venezuela (to the left) and Suriname  (To the right) and Brazil is below them. The country’s capital is called  Georgetown, and Guyana is the only South American nation in which English is the official language. The majority of the population, however, speak Guyanese Creole, an English-based creole language, as a first language. Guyana is part of the Anglophone Caribbean. It is part of the mainland Caribbean region maintaining strong cultural, historical, and political ties with other Caribbean countries as well as headquarters for the Caribbean Community (CARICOM). In 2008, the country joined the Union of South American Nations as a founding member. In 2020, the countries population was 786,559.