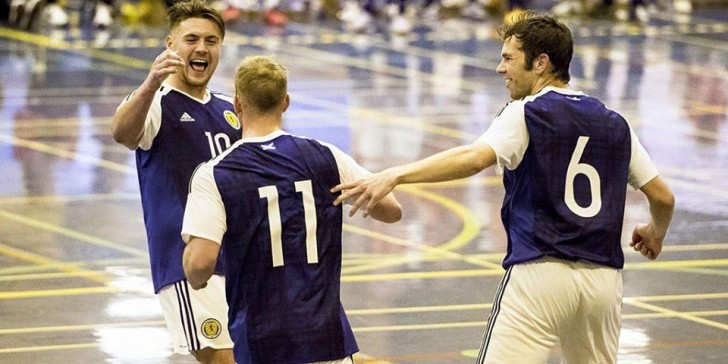 Mark Potter and his Scotland national Futsal team squad celebrated victory in their first ever home futsal international. The first half was a difficult battle for the Scottish players though they showed signs of confidence despite going behind . The players came onto the court for the second half and recovered from 3-0 down to defeat Gibraltar 4-3 at the Bells Sports Centre in Perth on a historic night for Scottish futsal.

Sean Muhsin scored twice to kick-start Scotland national futsal team’s second-half fightback, and it was Scott Mollison who levelled the score at 3-3.

Gibraltar had a player sent off and a penalty saved, before Craig McLeish grabbed the winner with a minute left on the clock.

The two teams face each other once more this evening at 7.45pm at the same venue, with free entry for spectators so don’t miss this opportunity to watch Scotland try to win the second international friendly match in a row.It will be a tough match as the players from Gibraltar will want to return home with a victory. This win for the Scotland national Futsal team is also a big step for the nation due to Gibraltar playing Futsal for much longer and many of their squad players play in the lower leagues of Spanish Futsal.