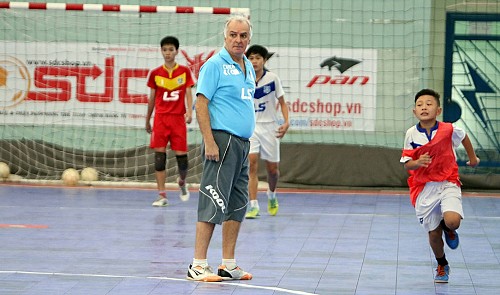 The experienced Brazilian futsal coach has settled in Vietnam, continuing a mission of turning a generation of young Vietnamese into great futsal players.

At  63-year-old futsal coach from Brazil with over 40 years of experience in training kids, has been coaching young players in the Thai Son Nam Futsal Club, the top team on Vietnam, for the past four years. Zego starts each training session at the club’s stadium in District 8, Ho Chi Minh City, by teaching young players new techniques before correcting their mistakes.

The coach then works with the kids, imparting tips and tricks gathered from his decades of experience in the game, in order to help his club develop the best techniques to excel on the field. The Brazilian Futsal coach came to Vietnam in August 2012 after being introduced to Tran Anh Tu, chair of the Ho Chi Minh City Football Federation, by Sergio Gargelli, head coach of Vietnam’s national futsal team at the time. Despite a lower salary, Zego decided to leave his job in Spain for a coaching position with Thai Son Nam after being offered the position.

His motivation for the move was rooted in knowing that Vietnam is one of the few Asian countries interested in training young futsal players at an early age. He was first charged with the coaching and strategic training of the club’s under-18 team before becoming a mentor to 20 players on the under-13 team in July 2015. Training children is a career that Zego loves, the coach said, adding that he has worked as a sports instructor for both adult and junior teams in about 20 different countries, mostly in Europe. Zego has found a special place in his heart for younger players as he wants to watch them grow each day, which has been a joy for him while working in Vietnam, the coach continued.

He said that his Vietnamese students are very fast learners and have a bright future in the sports. As futsal has its differences with association football, it is recommended that players begin training at young ages, Zego assessed, adding that children in his country usually start at the age of six. The Vietnamese national futsal team winning a ticket to the 2016 World Cup in Colombia in September has been a great motivation for his students, Zego said.

The trainer believes that the under-13 team will become the best generation of Vietnamese futsal players, as they have been given some great advantages compared to their older counterparts. Besides comprehensive training at an early age, the kids are allowed to observe the older and more experienced players during practice, according to Zego. The young players also have the opportunity to participate in friendly matches with the older athletes, he added.

Hieu Nghi, one of Zego’s students, said that before being coached by Zego, he would often become nervous when given the ball as he feared that it might be stolen by his opponents. However, with the instruction of the Brazilian Futsal coach, Nghi has overcome this problem. The young player believed that with helpful and exciting lessons from his teacher, he would become a member of the national futsal team and be able to compete in international championships.

“Zego, with his professional experience, has been doing a very good job for the past four years. I have great hope in the young players of his team,” Chairman Tu asserted.

Born in 1953 in Sao Paulo, Zego is a well-known name in the futsal world. He played on the Brazil national futsal team for six years. Among his accomplishments, the coach spent eight years in Spain training the country’s two major futsal clubs, which have each won national and European championships several times.
Sharing a little about his personal life, Zego said that he was not married, adding that if he was, his wife would not let him work in so many countries. The coach often takes a walk after work around his neighborhood in District 7 or heads to one of his favorite restaurants in District 1. The bustling life of Ho Chi Minh City during day and night is an attraction for expats like him, Zego said.

If you like the information provided, you can read more articles about Global Futsal by going to the top bar navigation or click here