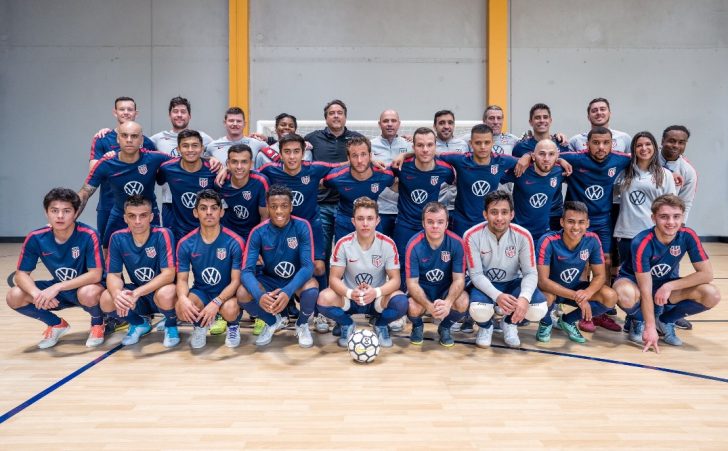 The U.S. Futsal Men’s National Team will face Cuba, El Salvador and either Nicaragua or Puerto Rico in Group D play at the 2020 Concacaf Futsal Championship from May 1-10 in Guatemala City, Guatemala. Concacaf (Confederation of North, Central American and Caribbean Association Football) conducted the draw for its futsal championship tournament that will send four teams to the 2020 FIFA Futsal World Cup today at its headquarters in Miami.

Ahead of Concacaf’s qualifying championship, the U.S. Futsal MNT will travel to Porec, Croatia from Feb. 25-March 8 for a pair of friendlies against Slovenia on Feb. 28 and 29 and to participate in the Futsal Week Winter Cup. The friendlies and tournament will help U.S. Futsal MNT head coach Dusan Jakica and his staff determine the members of the squad that will attempt to qualify for the USA’s first Futsal World Cup since 2008.

“The international games in Croatia are going to be critical for us in preparing our final roster for World Cup qualifying,” Jakica said. “In the past six months we’ve had three domestic camps and seven identification training events, and we’ve looked at more than 500 players. We are excited about the dedicated group of players we have selected for this important test.”

The U.S. will kick off the Concacaf Futsal Championship against El Salvador on Monday, May 4, face the Qualifying Round winner, either Nicaragua or Puerto Rico, on May 5 and wrap up group play versus Cuba on May 6. Kickoff times and broadcast information for all matches will be announced by Concacaf at a later date.

Guatemala, Panama, Costa Rica, and Cuba were placed in Pot 1 for the draw as the competition’s four highest-ranked teams as of February’s Concacaf Futsal Rankings, while Trinidad & Tobago, Mexico, Canada, and the USA were seeded in Pot 2.

The 10-day competition will be played in two stages, beginning with a Qualifying Stage that will be followed by a Championship Stage – group stage and knockout stage. The Qualifying Stage will consist of four matchups played on May 1 and 2 between the lowest ranked eight participating teams, according to the Concacaf Futsal Ranking as of February 2020. The four matchups are:

After a two-game series, the four Qualifying Stage winners will advance to the group stage of the Championship, joining the 12 top ranked teams.

At the conclusion of group play, the top two teams from each of the four groups will advance to the pivotal tournament quarterfinals that will determine the four nations that will represent Concacaf at September’s Futsal World Cup in Lithuania. Group D, in which the USA was drawn, will cross over with Group A to determine two of the pivotal quarterfinal matchups, while groups B and C will crossover for the other two quarterfinal games.