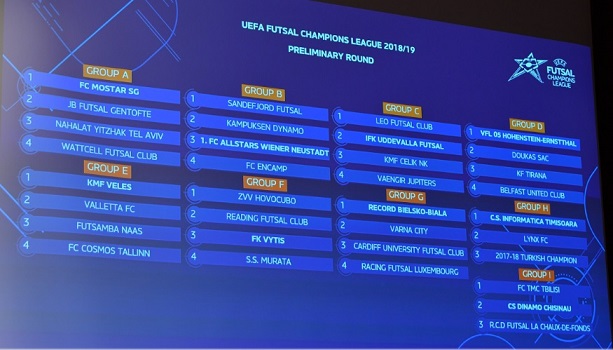 Wattcell Futsal Club (Scotland), Belfast United Futsal Club (Northern Ireland), Futsamba NAAS (Republic of Ireland), Reading Futsal Club (England) and Cardiff University Futsal Club (Wales) are all taking their next steps in development in the first ever UEFA Futsal Champions League. UEFA made the decision to rebrand their former competitions, UEFA Futsal Cup, for this season and move that was welcomed by all across the sport.

Being under the Champions League brand will further enhance the credibility of the sport in Europe in developing nations and aid the sports awareness, recognition and help to attract more clubs and investors into this growing sport that is booming in Europe.  In Poland, Group G host club, Record Bielsko-Biala having been working hard to promote the competition across their city to make this stage of the competition a memorable one for the visiting clubs, Cardiff University, Racing Futsal Luxembourg and Varna City plus for all those who attend the matches. 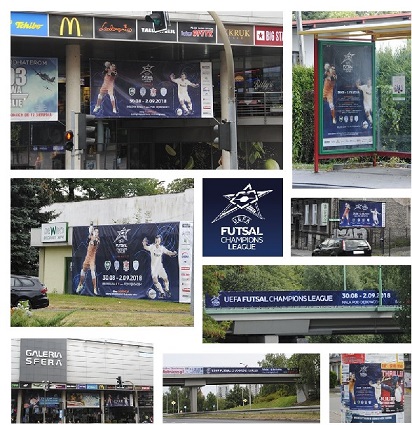 Here are the format and key dates for the new season.

What is the format?

• The top three nations in the UEFA Futsal National Teams coefficient rankings will have two guaranteed entries in the competition: for 2018/19 that is Spain, Portugal and Russia.

• Kazakhstan (ranked fourth) will also have a second entrant for 2018/19 as Spanish champions Inter FS will enter as holders (joined by Barça; no country can enter three teams even if the holders finish outside their national top two).

• There are preliminary, main and elite rounds, played as one-venue mini-tournaments leading to the four-team finals, under the same format introduced for 2017/18.

• A record total of 57 clubs have entered the new UEFA Futsal Champions League: all will be involved in the preliminary and main rounds, which were drawn on 5 July.

Group winners progress to the elite round
Elite round draw: 14 October
Elite round: 13–18 November

Four groups of four will be formed with the winners progressing to the knockout finals, hosted by one of the qualifiers
Finals: 25 or 26 & 27 or 28 April

When do teams enter?

• The lowest-ranked teams in the UEFA Futsal Champions League club coefficient rankings for 2018/19 will begin in the preliminary round (depending on the number of entries, this season 34). Group winners (nine this season) will progress to the main round.

• No teams will receive byes to the elite round, and all contenders excused the preliminary round will begin in the main round.

• The main round, with a total of 32 clubs, is split into two separate paths.

• Path A will consist of 16 teams including the holders. In addition, the sides ranked 1st to 11th and 16th to 19th in the UEFA Futsal Champions League club coefficient rankings (excluding the holders) will go into Path A. They are drawn into four groups of four, with the top three in each advancing to the elite round.

• Path B will comprise the other 16 teams (ranked 12th to 15th and 20th to 22nd, plus the nine preliminary round qualifiers for this season). These are drawn into four groups of four, with the first-placed sides proceeding to the elite round.

• The 16 teams will be drawn into four groups, the winners of each progressing to the knockout finals.

• There will be three seeding pots for the elite round draw.

• The four main round Path A winners will be drawn into position one of each group.

• The Path A runners-up will be drawn into position two and will not be able to meet the winners of their main round group.

• The other eight clubs will then be drawn to fill the remaining two positions in each group (sides that finish third in a Path A group can meet either the winners or the runners-up from that section).

• There will be no country protection.

• As before, the competition concludes with a four-team knockout final tournament hosted by one of the contenders.