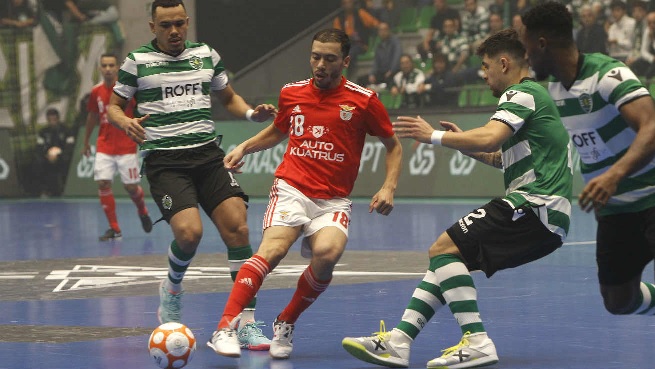 The Final Four of the UEFA Futsal Champions League are Inter Movistar, Barcelona, Sporting Club de Portugal, and Kairat Almaty. And, the road to the final four was filled with drama especially for SL Benfica and Sporting Clube de Portugal.

The Portuguese derby between SL Benfica and Sporting Clube de Portugal is a fierce rivalry so meeting in UEFA’s premium European competition for Futsal, the UEFA Futsal Champions League, in a fixture that would decide their fate in the competition is an atmosphere and match both clubs and players will remember forever.

For SL Benfica, the former winners of the competition in 2009/ 10 when over 15,000 fans watched them defeat Spanish giants, Inter Movistar, this fixture against Sporting Club de Portugal ended in defeat.

Benfica got a 1-all draw against Sporting on Sunday and stayed out of the final four of the UEFA Futsal Champions League, in an unprecedented European derby with excitement and uncertainty until the dying seconds. After two wins – against Novo Vrijeme (5-0) and Sibiryak (4-2) –, Benfica entered the court of Pavilhão João Rocha, Sporting’s home ground, determined to win a spot in the final four. For that to happen, the Reds needed to win, while Sporting – with advantage in the goal difference – a draw was enough to go through to the next stage of the competition.

Now the final four will have to wait with anticipation to find out who will hosts the finals. The hosts of the final tournament will be selected from the four qualified teams at the UEFA Executive Committee meeting in Dublin, the Republic of Ireland on 2–3 December 2018. The Finals will take place in early 2019.