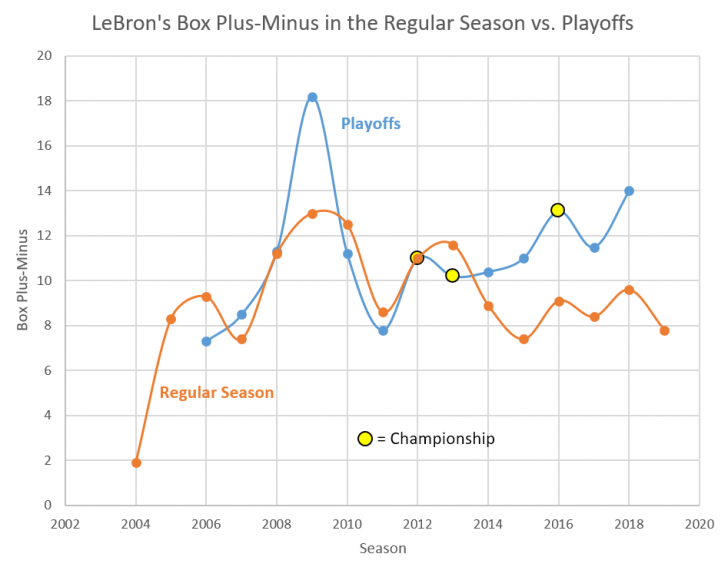 Last month, the FA National Futsal Series (The pinnacle of English Futsal) tweeted about the Box Plus/ Minus (PBM) metric, stating:

“Something that might be worth doing is looking at whether plus-minus works as tool for assessing futsal players. The many rolling substitutions and frequent scores might make this a simple and effective tool for coaches…..or a detailed comparative review of futsal development strategies worldwide to identify the most successful strategies and tactics and relate these to any relevant cultural contexts.”

Reading about the Box Plus/ Minus (PBM) metrics, Futsal Focus wanted to take this a bit further and highlight it for those who not have heard of it by publishing this article.

As the title of this article states the Box Plus/Minus,  is a box score-based metric that estimates a player’s contribution to the team when that player is on the court. And, it is a metrics used in Basketball which many futsal fans argue should be the sport that is compared to futsal rather than the traditional assumption which is relating futsal to football just because there is a ball being kicked and a goal being used.  The basketball-reference.com website describes the metrics is based only on the information in the traditional basketball box score–no play-by-play data or non-traditional box score data (like dunks or deflections) are included.

BPM uses a player’s box score information, position, and the team’s overall performance to estimate the player’s contribution in points above league average per 100 possessions played. BPM does not take into account playing time — it is purely a rate stat! Playing time is included in Value Over Replacement Player (VORP) which is discussed below.

To give a sense of the scale:

Here is a histogram of all player seasons from 1974 to 2019. Note that, by count of player seasons, there are far more below average seasons but that when you look at minutes played it is balanced. 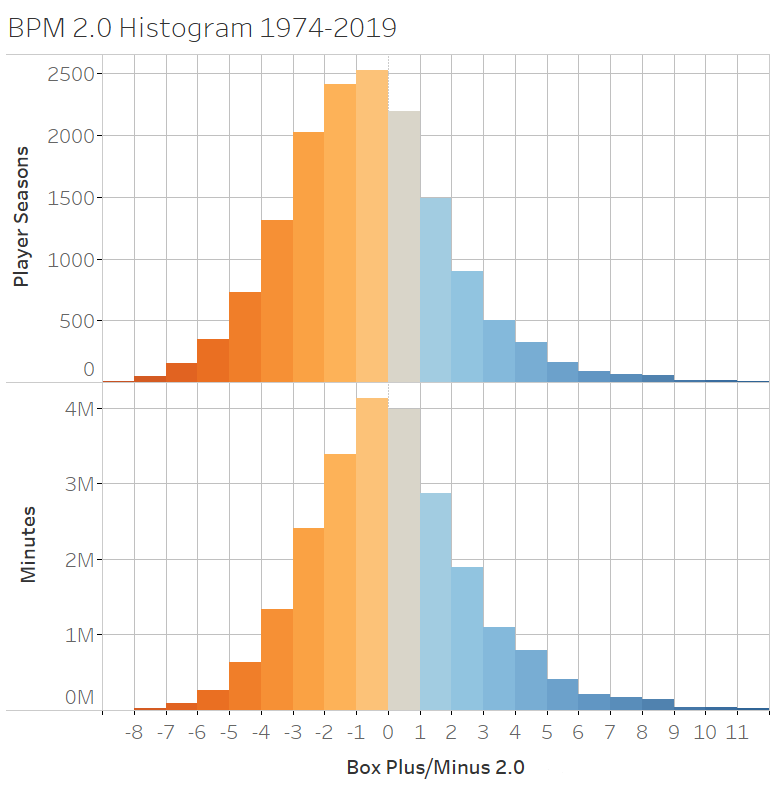 For team scale, an elite team might have a regular-season team-level efficiency in the range of +8.0 per 100 team possessions. That elite team’s best lineup of their five top players might be in the +14 range or even higher.

How does Box Plus/Minus evaluate players? The basic concept is simple. BPM starts by assuming that every player on the team has contributed equally. If the team is good, all of the players are assumed to be equally good.

Next, the box score information is added to revise the evaluation. All of the box score data is measured relative to the other players on the team. Does this player get more or fewer steals than the other players on the team? If more, this player is likely better on defense than they are. Do they score more or less efficiently? Do they have more or fewer assists?

This box score information is also weighted according to what position or role the player has on the team. For instance, a block by a center is good, but a block by a guard is great. Similarly, scoring by a low usage player has to be very efficient to mean much to the team, since they aren’t putting pressure on the defense.

Now, some of the box score data does not help measure a player’s impact on the team, even though the stat may be obviously valuable to the team. Defensive rebounds fall into that category. They matter to the team, but it really doesn’t matter who on the team gets them. The credit for getting that rebound mostly gets split among the team, rather than all being credited to the player who actually pulled the rebound down.

BPM was created to intentionally only use statistics that are widely available and are available historically. Recently in the NBA far more statistics have been gathered, either from play-by-play or hand tracking, which allow more detailed metrics. BPM does not include that data and should not be as accurate as stats that do include the additional information (assuming they are implemented rigorously!) like Player Impact Plus/Minus and Real Plus/Minus.

You can also learn more about the video below dives into the entire world of plus-minus as a way to determine impact or value. Is single-game plus-minus any good? Full season vs. on/off data? How do we account for teammates? And if we make the right adjustments, do we have an ideal one-number stat for ranking NBA players?

If you like the information provided, you can read more articles about coaching by going to the top navigation bar or click here