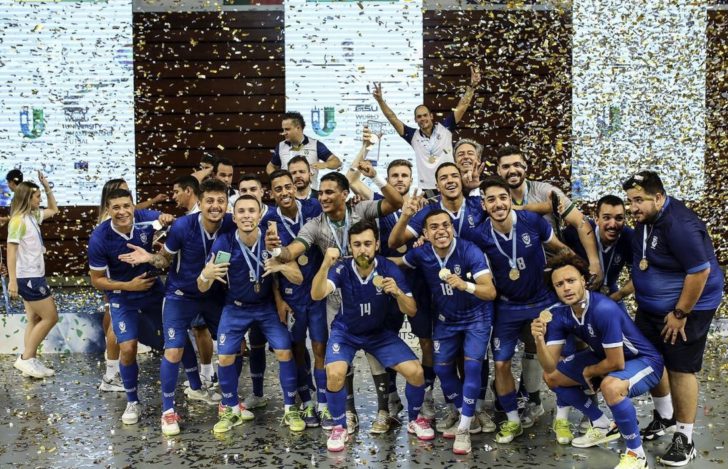 The University of Minho (UMinho) organized the 2022 University Futsal World Championship and the cities of Guimarães and Braga hosted the event that which took place from the 18th to the 24th of July.

After 10 years, Academia Minhota once again hosted a Futsal World University Championship, the last one was in 2012 in the city of Braga, within the scope of the European Youth Capital 2012. After a decade, the organization of the event once again was delivered by the Academic Federation of University Sports (FADU) in partnership with UMinho and the Academic Association of the University of Minho (AAUMinho).

For the president of AAUMinho, Duarte Lopes, the organization of this championship “was a difficult job”, due to the short preparation time, instead of the usual two years, it was five months, despite this “it was will certainly a positive achievement both for sport at UMinho, as well as for cities and the country”, he said.

The Futsal World University Championship is one of the events with the greatest scope of the entire FISU calendar, with futsal being one of the sports with the greatest tradition at their University and with a strong tradition in Portugal. This event thus contributed to strengthening their link and the development of the relationship between University Sport and Federated Sport, in the sense of valuing dual careers, as well as involving the local community and the entire national futsal “family”. It should be noted that both UMinho and FADU have a very close relationship with the Portuguese Football Federation, in a logic of continuous sharing of resources, facilities, and knowledge, which was an essential factor for the success of this event.

The men’s team from Brazil and the women’s team from Portugal won the gold medal at the 2022 FISU World University Futsal Championship held in Braga-Guimarães (Portugal). They edged past Ukraine and Brazil, respectively, in finals that were highly disputed and tense until the very end.

The Brazilian women’s team will long regret its passivity and lost focus at the end of a match it mostly dominated and should never have lost. Trailing 1-5 at half-time, the Portuguese squad fully exploited some Brazilian complacency towards the end of the match and managed an improbable comeback at the very last second. The score remained unchanged at 5-5 after extra time and Portugal eventually won the penalty shootout lottery.

Beaten 6-3 by Brazil in the men’s group phase, Ukraine (who defeated Portugal in the semi-final), raised their game and took the bull by the horns in the final match of the tournament and pushed the “Auriverde” (Name for the Brazilian flag) to their limits. The Brazilians needed extra time and a bit of luck to prevail in the end (6-4). But few will argue with the fact that they deserved the title, given their supremacy during the whole competition.

You can watch the final between Ukraine and Brazil below: