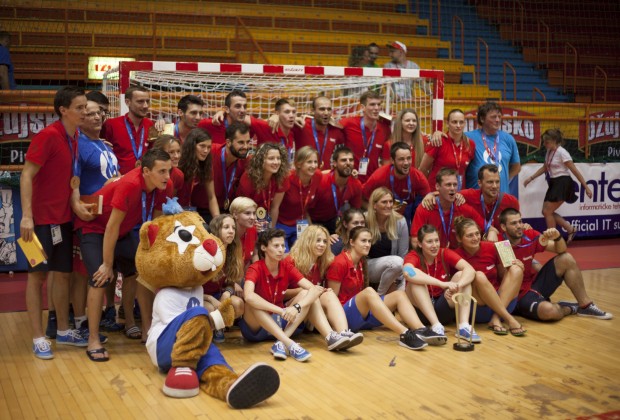 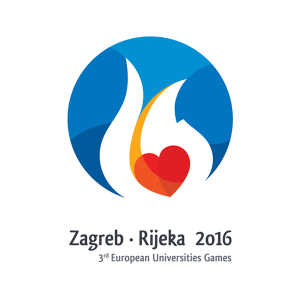 In front of full stands of the Hall of Sports and in an atmosphere worthy of the final match, the University of Zagreb and Siberian Federal University finally faced off.

Valerii Zykov scored a goal for the Russian team in the 6th minute, which gave them a needed boost, but Zagreb was not far behind either. Nikola Grgić tied the score in the 13th minute, and Dario Markić put Zagreb in a 2-1 lead before the end of the first half-time.

After the break, the game got more intense. Vladimir Iakimenko, captain of the Russian team, tied the score 2-2. The Russians did not have a lot of time for celebration, because Nikola Grgić soon scored his second goal of the match, followed by Zykov’s own goal, which secured the Zagreb team a 4-2 lead.

The nearly full stands of the Hall of Sports were in the state of ecstasy. They followed every action with loud clapping, and doubled their efforts whenever the hosts would put the opponents’ goal in peril. In an attempt to tie the score, the Russian team put their goalkeeper on the offensive, a strategy that paid off in the 37th minute when Vladimir Goncharov scored the third goal for the Siberian Federal University, making the score 4-3.

The Zagreb team did not wait long before taking advantage of their opponents’ goalkeeper strategy. In the following two minutes, the University of Zagreb concluded the match and the competition. Dario Markić scored 5-3, Tvrtko Pajalić 6-3, and finally, Robert Grbić scored 7-3. After the final minute of the match, Zagreb began rightfully celebrating their title of European futsal champions.

The first part of the match was very intense. The Mostar team put a lot of pressure on the Portuguese team and controlled the ball and the game for the entirety of the first half-time. Just before the break, Mostar’s goalkeeper got involved in a discussion between two players, earning all three of them a yellow card. The first half-time ended in a 2-1 lead for the University of Minho. Andre Coelho scored two goals for the Portuguese team in the 3rd and the 7th minute, while Marin Suton scored one goal for the Mostar team.

As the game progressed, tensions only got higher. Yellow cards were flying left and right until their number reached seven, and one of the players from Mostar even earned himself a red card.

Eight goals were scored in the second half-time, making it rather intense. The Bosnian team went for the goal on multiple occasions, but they never made it. On the other hand, the Portuguese team scored 7 goals, first of them in the 24th minute to make the score 3-1. The University of Mostar scored their second goal in the 25th minute, bringing them once more closer to a tie, but that was only followed by an endless stream of Portuguese goals.

In the final minutes of the second half-time, Minho’s goalkeeper scored a goal for his team from all across the court. This win rightfully secured the University of Minho a bronze medal, and their best player was Andre Coelho with three goals.

Nilson Miguel from the University of Mino said his team was aiming for the gold and that they were not satisfied when it turned out they would have to compete for the bronze.

“It wasn’t easy. Luckily, we won and we’re happy to have a medal.”

Zagreb’s journey to the gold

At the EUG futsal competition, the University of Zagreb lost only once – during their first match against Mostar in the group stage. Their coach Jakov Ungarov commented on Zagreb’s journey to the finals.

“During our first match against Mostar, we were simply not in shape. The defeat turned out to be a good thing, because it made us realize we needed to step up our game in order to be considered formidable opponents at the Games. In all the following matches, our players gave their all, which ultimately secured us a gold medal. I only had to point them in the right direction and warn them about their mistakes, and here they are, celebrating the title of European champions in front of our fans.”

”We’ve been training for this competition since the beginning of the season. It feels amazing to finally win. The match with the Russian team was by far the most difficult one, because it was the final match and people were scrutinizing our every movement. As far as my best goalkeeper title goes, I owe it all to my team. Only a good team is capable of producing a good player. ”