Indonesia for the first time in their history is hosting the AFC Futsal Club Championships and the competition has been ongoing for the last week with the quarter-finals taking place tomorrow.

In Group A, Dalian Yuan Dynasty lost to the group winners Nagoya Oceans Futsal Club from Japan where Futsal has been played for many decades, they drew with Vamos Mataram from Indonesia and they defeated Victoria University College from Myanmar, exiting the competition on goal difference.  Though the Chinese will be disappointed they can hold their heads up high. Drawing with their Indonesian counterparts was a great benchmark for Chinese Futsal development, Futsal in Indonesia is very popular their professional league fixtures are played in state of the art facilities and draw crowds in their thousands. While the Indonesian National Futsal team are 53rd in the world rankings, 15 places above China. 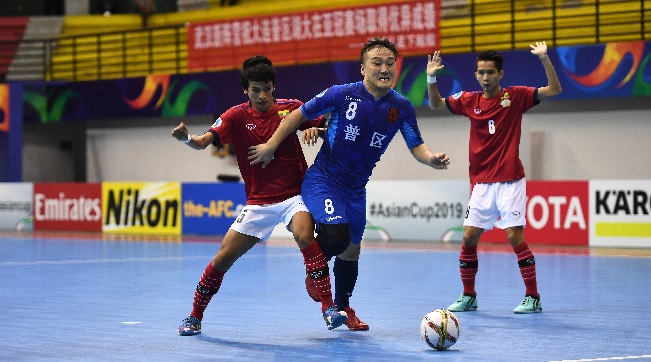 In Group B, Naft Al-Wasat Sports Club from Iraq won the group defeating Thái Sơn Nam Futsal Club from Vietnam,
Jeonju Made Axis Glory Futsal Club, commonly known as Jeonju MAG FC from South Korea but, drew with Al Dhafra from the United Arab Emirates.  To place second Thái Sơn Nam Futsal Club and Al Dhafra met each other in their final group fixtures for a place in the Quarter-finals, it was a high-intensity game from the first blow of the whistle as both teams came racing out of the blocks in the first half, trying to stamp their authority. End to end action but the deciding factors came in the final minutes of the game. Thai Son Nam made it 3-2 in the 36th minute after Nguyen volleyed home his effort from close range but Al Dhafra countered a minute later and equalised through Nascimento in the 37th minute. Thai Son Nam saved the best for last as they scored the winner in the 40th minute through Altawail when they activated the power play to stage a dramatic comeback. Miguel Rodrigo’s charges will take on Group A winners and three-time champions Nagoya Oceans in the quarter-finals on Wednesday.

In Group C, defending champions Bluewave Chonburi Futsal Club put in three dominant performances defeating their opponents Vic Vipers (Australia) 9-2, Osh EREM (Kyrgyzstan) 1-5 and Al-Sailiya (Qatar) 7-2. After their final match against Al-Sailiya, Bluewave Chonburi Head Coach Rakphol Sainetngamwas said to AFC: “I’m satisfied with our performance today and I gave chance to the younger players to gain some experience. They are not up to the mark yet with the established players but we will get there. The games will be harder from now on and we just have to keep improving. We play Bank of Beirut in the last-eight, they are a very strong team but for us it’s about revenge against Lebanon who beat us (Thailand national team) in the AFC Futsal Championship in Chinese Taipei this year.”

In Group D, Islamic Republic of Iran’s Mes Sungun Varzaghan topped the Group with a perfect record after defeating Lebanon’s Bank of Beirut 3-1, the club was also victorious against Tajikistan’s Sipar Khujand (9-2) and Uzbekistan’s AGMK FC (1-9).  After their match against Bank of Beirut, Mes Sungun Varzaghan Head Coach Hamid Bigham Tabrizi said AFC: “This was one of the best games we had. Both teams played aggressively and technically it was very good as well. Our main target was having a stress-free game without picking any cards, I believe we have achieved what ever we had in our minds.

Tomorrow, the dream of a final place begins with the Quarter-finals that will see:

All the great matches that we recommend you not to miss!