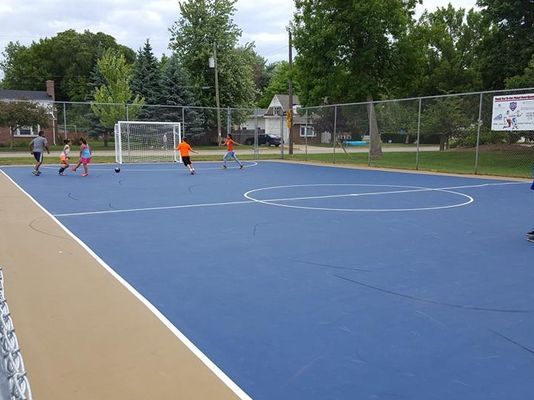 Recently, Futsal Focus published an article concerning the great work done by the Wisconsin Sports Group to provide Futsal opportunities in Milwaukee, Wisconsin, USA and now the first outdoor futsal court north of Milwaukee was officially welcomed to the Fox Cities when the community celebrated on Monday, 5th September, 2016.

The court, at Pleasants Park on 7th Street in Menasha, has been in the works for about 18 months and opened for play a little more than a month ago. The ceremony will be held at the court.

Futsal is a modified form of soccer played with five players on each side played on a smaller, typically indoor court. Outdoor futsal courts have started popping up in recent years as the sport gains popularity.

“It’s pretty cool,” said Jason Schwalbach, who spearheaded the effort to bring the court to the Fox Cities. “I couldn’t have done it without the Park and Rec’s help, that’s for sure. I had a vision and a dream a year and a half ago and with the help of the Park and Rec and the Mayor (Donald Merkes), it came true. And, obviously, the sponsors. It couldn’t have happened without those guys.”

The 37-year-old Schwalbach started thinking about bringing an outdoor futsal court to the Fox Cities in January 2015. He made the proposal to a few cities but when they didn’t bite, he went to Menasha Parks and Recreation director Brian Tungate.

“They didn’t really know what futsal was at first. I explained to him what it was and they had kind of open arms to it,” Schwalbach said.

The futsal court was originally planned for Winz Park in Menasha, but Pleasants Park eventually became the final landing spot.

“I actually hit a roadblock getting money,” Schwalbach said. “That’s where the mayor came in and helped me out. He hooked me up with Kathy Seifert and she was a really, really big help getting some of the funds for me and getting me in contact with some of the other people.”

The court is open to the public on a first-come, first-serve basis. There is talk of leagues forming as early as this fall. There is no fee to use the court, but players must provide their own ball.