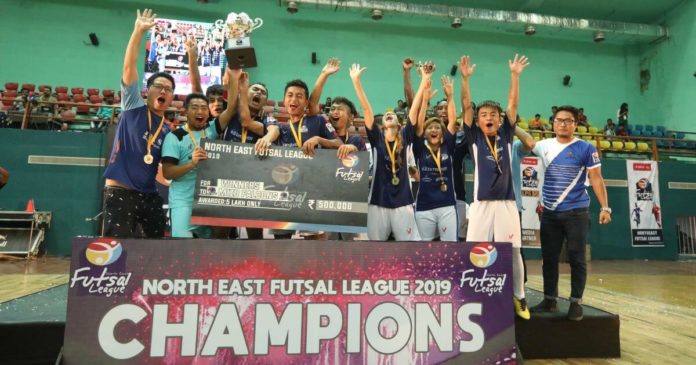 The flagship edition of the Northeast Futsal League (NEFL), which was unique in itself for the being the first mixed-gender game came to an end on August 31 on a successful note. For the first time, the region witnessed this kind of participation including the foreign players.

Ranajit Mahanta opined that it’s been a huge success for the organizing team to have hosted the championship braving all the odds.

In an exclusive chat with The Bridge, outlining the success of NEFL Mahanta said, “I’m quite relieved and happy to have seen it end successfully. People have come to watch the matches and went back satisfied. Among others, the major challenge was to overcome the psychological challenge of how girls and boys will play together. There were so many issues – starting from the dressing room. But we could do it.”

There are also ongoing preliminary talks of conducting the league for a second edition and across different places of the region. The primary objective of PSR is to provide a strong platform for the players of Northeast India. Working with the Association of Youth Futsal, Proclivity has been promoting football and futsal in the region for the past 10 years, both at grassroots and senior levels.

It is always a team ?behind the scenes which makes the show perfect and this is Team NEFL ⚽?️
who made India’s ?? first mixed gender league a memorable event for all of us

The tournament also witnessed some high octane encounters contradicting to what people had assumed because of mixed gender players it will not be that competitive, it has proved to be otherwise. He said that not the entire NE but people from different places of the globe have accepted the mixed-gender Futsal.

“We are really excited to know that some international players have expressed their willingness to play in the league next season. Even the Premier Futsal players are also highly interested to play. Some of the women players of Spain National team have also reacted in a positive way. This indicates that the playing standard of the matches were high,” Mahanta added.

NEFL will act as a springboard in providing young budding athletes with an annual stage to showcase their talents in the sport of Futsal. Also, the concept of mixed team portrays sports without gender segregation and is a great way to boost female participation in sport through channels of exposure and growth.

Source of the article: https://thebridge.in

If you like this video and the information provided, you can read more articles about global futsal by going to the top bar navigation or click here