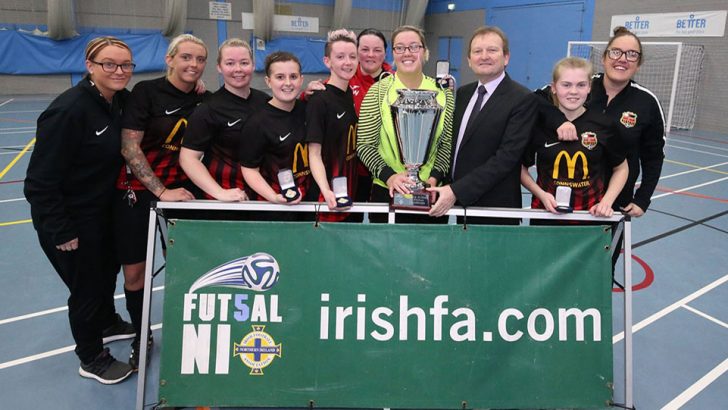 Crusaders Strikers, Carnmoney Ladies, Lisburn Ladies, and Foyle Belles all produced fine performances to book their places in the last four teams remaining in the hunt to be crowned Northern Ireland Women’s Futsal League champions for 2018-19.

The Northern Ireland Women’s Futsal League kicked off last October and has reached the semi-final stage.

The Strikers, who defeated Carnmoney Athletic 5-0 in the quarter-finals, have been drawn to face another team from Carnmoney in the semis. Their opposition this time will be Carnmoney Ladies, conquerors of South Belfast in the last eight (10-3).

And Lisburn Ladies, who beat St James’ Swifts 5-3 in the quarters, will be up against Foyle Belles, who produced a fabulous defensive display on their way to defeating Cliftonville Ladies 2-0.

Both semi-finals are being staged in Belfast’s Shankill Leisure Centre on Friday (25 January) and entry is free. The Crues and Carnmoney are due to kick off at 7.30pm, with the Lisburn v Foyle match to follow at 8.30pm.

The four teams will be aiming for a place in the decider, which is also being staged in Shankill Leisure Centre – on 1 February (8.30pm start for final, 7.30pm kick-off for third/fourth place play-off).

This season’s Women’s Futsal League kicked off in October with 20 teams involved.

It attracted sides from the NIFL Women’s Premiership, the NIWFA Championship and NIWFA’s North 1 and 2 plus South 1 and 2 11-a-side leagues.

All the teams participated in a series of qualifying rounds which will culminate in the final. There was also a plate competition which saw Belfast Swifts play Queen’s Ladies in the decider, with the Swifts winning 3-2.

Both reigning champions East Belfast and Linfield Ladies, runners-up in 2017-18, failed to reach the latter stages of this season’s competition.

The Irish FA Foundation’s Jackie Blyth, who organises the league, pointed out: “This was the first season that futsal has been played on the full court at the Shankill. That has helped to improve the standard of each game and kept the players’ fitness levels up outwith the 11-a-side season.”