ProFutsal Academy has come along away since it’s establishment in October 2015. Currently, the club already has teams running from U8s all the way to its development squad and first team. The club’s philosophy is to create a pathway for elite players at all age groups so they can progress to playing in the national league and hopefully internationally. We currently have many venues within the north London and the Essex area. Our elite academy train on Saturday mornings at Parmiters School with the development squads for each age group train at a number of different venues throughout the week. As part of a ‘Grow The Game’ grant that we received, we will also be setting up girls team, something we have been looking to do for a while.

The academy has grown from 20 players to over 120 in the space of a matter of months and on top of this we have an extensive waiting list for nearly all of our training venues. The only problem stopping us expanding the number of players at the moment is finding venues of sufficient quality to hold sessions. Starting in September, the U8, U10 and U12 age groups will all be a part of a newly developed Youth Futsal league in London. This league is invite only and further details of this will be announced shortly but the hard work of many elite youth futsal clubs such as Ole Futsal Academy, Finta and Junior Bocas means that there are some very influential and passionate people looking to develop our sport even further. The reasoning behind this is to keep the standard of the league high and stop football teams from entering players who are in the mindset that it is a 5-a-side league. An England v Rest of the World Exhibition Match to celebrate the establishment of the league is scheduled for July 9th at the Copper Box as well as a U12 tournament with 2 players representing each of the teams who will be a part of the youth league. It would be great to have as many spectators along to this as possible so if you are around then please come and support our efforts! 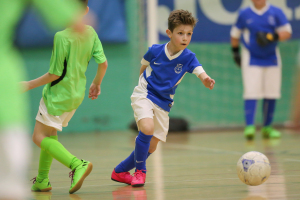 We are unique in the service we provide in terms of our player feedback as all sessions and matches are filmed. These videos are edited and every player within the academy set up receives monthly video clips with areas that they need to work on along with parts of their game that they are excelling in. Along with this, we also have a unique coaching syllabus from which we work. Our syllabus has taken years of hard work to put together and combines a mix of personal experience as coaches as well as inspiration from other top academies both within the UK and abroad such as Barcelona and El Pozo Murica.

Our u16 academy squad travelled to Barcelona for the inaugural world youth Futsal cup in December and played in the U18 category which proved very tough games in terms of results but certainly didn’t stop it from being an unforgettable experience. We have been invited back to participate again this season and we will be taking 2 age groups this time round to compete in the Alevin and Benjamin competitions.

Our first team has been accepted into the National League South and we are looking forward to kick off their season in September. We will be playing our home games on Sunday afternoons. Before the first team matches kick off, there will be a development squad match as well as academy games. This way we will have all the parents and players from the earlier Sunday games staying to watch and support the first team, therefore creating an excellent atmosphere. Our trials for the first team take place this Sunday 3rd July at Sandringham School in St. Albans, 12 noon – 2pm and the following Sunday 10th July at Leyton, Score Centre, 1:30pm-3:30pm. If you are interested in joining the academy or getting involved in the first team please get in touch: info@profutsallondon.com.