Rashida Adams earning her refereeing stripes in futsal in Uganda 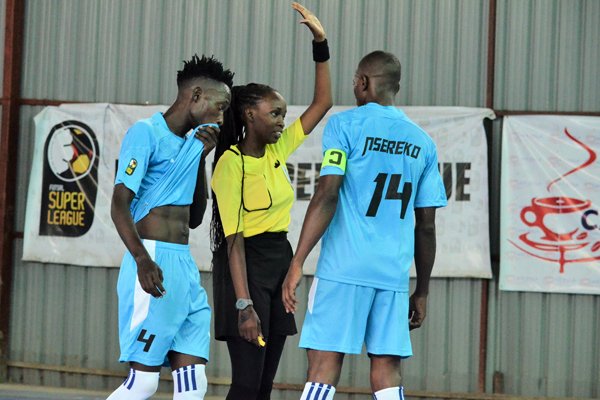 The world cup in September will see history made when Gelareh Nazemi takes to the courts to officiate at the 2021 FIFA Futsal World Cup. However, in another part of the world another woman is making strides in the sport of futsal and that is Rashida Adams in Uganda.

Rashida Adams has made a name as the first woman to officiate the Futsal Super League games with standout performances this season. But nothing happened because she is just a woman. She has worked her way up.

“It is hard to believe but it has been an honour and a humbling experience. I’m glad to be a woman referee in futsal,” Adams says.

Adams might be a peculiar first name – from her father – for a Ugandan but the beholder has no qualms about it. She is a trailblazer. What started out as curiosity accompanying a friend to the futsal game has brought her to the centre of attention in Uganda’s infant futsal scene.

Adams grew up in Kampala, with brothers and an uncle she prefers not to name, who played football. As early as Primary Three at Nakivubo Blue Primary School, Adams played football as a midfielder with Kampala Junior Team (KJT). She went on to earn sports bursaries to high school when she attended Kakungulu Memorial School.As a player, she was weak and did not go far. Most of her time she now plays in small-sided games, especially the Corporate League.

Adams is a student of journalism at Makerere Institute for Social Development where she wants to learn the tricks of photography and editing.

Not wanting to lose the camaraderie and competition sports had provided her, she reluctantly looked into becoming a futsal official. As she said, it was life changing.

“I used to watch futsal league games because I was a footballer. I had a friend in Riham team, who used to call me for Corporate Games. He is the one who introduced me to the game when he invited me to Mengo Kisenyi where the inaugural league games were held.

“Futsal was unknown to me and I had come hoping it was like the Corporate League games where each team must have a female player. After watching the games, I found out it was a highly competitive team game,” she recalls.
Adams made attempts to convince officials to include women teams in the league but the Futsal Association chairman, Hamza Jjunju, said this was a decision that needed to be approved by the executive and blessed by their parent body, Fufa.

She, however, began coming to the facility where they were discounted and allowed to play games every Sunday. Adams then received a call from Patrick Lugemwa about an opportunity for women referees. It was a one-week course conducted at the International Futsal Courts Uganda in Kisenyi.

“At that moment, I neither had money for the course nor interest in the whistle. All I was dreaming at the time was playing,” Adams says. 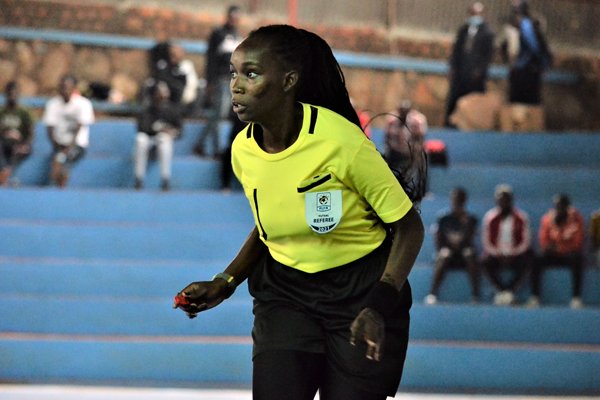 Into the deep end

Elvis Sekate, who owned Parakeets team, had heard about Adams and had met her frequently during the Sunday games, and he thought she had the right personality to excel. Sekate offered to pay the course fees for Adams and her KJT teammate Dorothy Nakanwagi. Sekate was convinced about Adams’ philosophy and understanding of the rules of the game of futsal.

Jjunju later heaped praise on Adams saying she has the ability to calm coaches and offer explanations whenever needed.

“Coaches are now confident with her abilities and that is helping her a lot. You hardly hear complaints about her officiating,” he adds.
Jjunju offered her the chance to become the first woman to officiate in the urbane futsal league.

Today, it does not matter whether she is a woman referee; she says there have not been any challenges with her gender.

“Most of my interactions with my fellow referees have been very professional. They treat me so well and guide me always. If they are fathers, I have a family in them,” she says.

For the players, Adams says there are instances when she felt undermined.

“Some want to use the advantage of knowing me. One time a player undermined me but I took it easy. But this normally starts from the coaches. But I speak to them calmly,” Adams says.

Shortly after Adams joined the band of the men in black, she started training on her football game with Sadick Sekyembe, a player now with Express, while reading manuals to comprehend the rules of play and their spirit.

“It is quite a commitment. It is important to understand the situations that arise during games. But I am doing this because I love the game and refereeing,” she says.

‘I want to see women in futsal’

Adams has been among the seven officials who handled futsal league games this season. The other are Ismail Mulindwa, Brian Emmy Nsubuga, Isaac Ssengendo, Benon Kanamwanje, Erias Kafeero and Bashir Lukabwe.

However, there are other trained woman officials. The Futsal Association of Uganda has 33 enrolled referees, incluyding the women in Nakanwagi, Sylvia Mbabazi, Mercy Kantono, Dorcus Namukisa and Yudayah Nalubega.

“She is among those that managed to officiate this season. Maybe the others had busier schedules,” Jjunju explains. 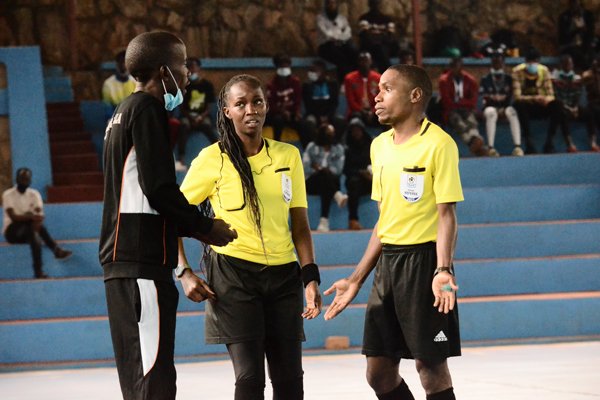 Adams has to juggled her studies with other hustles.
“My guardian [Sekate], siblings and friends have been very supportive to balance it all. All I have learned is to stay positive and focused,” she adds.

Adams likes to have henna tattoo designs on her hands. “But that is not to suggest that I want to be taken in a separate category as a woman athlete. I am still a girl. I want whoever looks at me to understand that I’m a referee,” she says.
Since Adams started officiating, two editions of the league have been held and there is no indication that the women will start playing any time soon. It bothers her a little.

“I want to continue working so hard to excel as a person. But I would be very glad if the women are admitted into the league. I know I cannot play anymore but that would be the best thing to happen in my career,” she says.

Rashida Adams was born to Hadijah Tawusi and Yusuf Adams in 1999. The student of journalism, who lives independently from her parents, was not initially into the whistle but had fallen head over heals in love with the five-aside game of futsal from the Corporate League. After she was nudged into taking up the refereeing training, she suddenly found herself breaking the ground for women and became the first from her gender to officiate in the Futsal Super League in the season that is left with the finals.