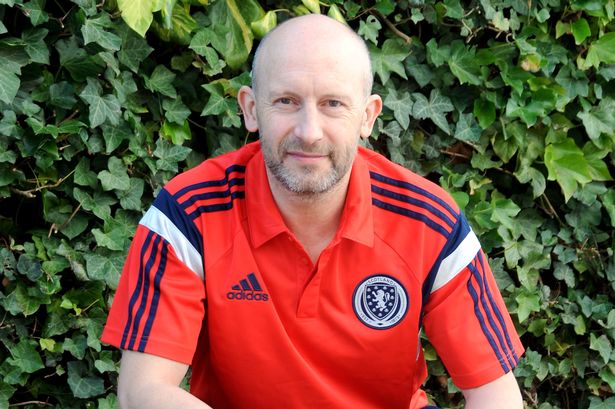 Recently in Scotland, the home nation welcomed Gibraltar for two international friendly matches. These fixtures gave the Scotland Futsal head coach an opportunity to observe his players and see if his development plans are making progress, he was not disappointed. His players put in two great performances and won the country’s first international Futsal matches.

After the match, Mark Potter Scotland Futsal Head Coach spoke to Futsal Focus about his international team, Futsal developments in Scotland and more.

Congratulations on winning your first international matches with the Scotland national futsal team especially at home which must have been a very special occasion for you and the players.

Since Scotland’s first experience on the international stage at the UEFA EURO qualifiers, what plans were put in place to develop the squad further?

The national squad underwent a further round of player trials in September 2015 as part of an ongoing talent identification process and new players were added to the remaining squad from the Euros to form the current National Development Squad. There were considerably larger numbers available thanks in no small part to the added regular league activity across the country, and this squad has been reduced to around 22 – these players were used in the recent matches against Gibraltar. As with all International squad activity, players will drop out, and new players will come in over the period between now and January 2017 but we will always look to add quality where we can. There are regular National Development Squad training sessions which are well-attended and popular with the players.

What plans did you and the Scottish FA make to help your own development as Scotland Futsal Head Coach?

I was invited by the Scottish FA to join the working group which attended the UEFA B License seminar in Belfast last June, and I am part of the group working on developing and presenting the SFA Level 2 Futsal Course – an interim qualification for coaches hoping to undertake the B License when it is delivered in the next couple of years. It was a terrific opportunity to work with some top coaches in Belfast and learn more about their methodologies and how varied their approach to the sport is; all with similar levels of success.

I attended the English FA “DNA” Course at St Geroge’s Park and take advantage of the SFA CPD Programme wherever I can. I am always looking to develop as Scotland Futsal Head Coach.

The Scottish Amateur FA with the Scottish Futsal League has developed more leagues to give more people across the country the opportunity to play. How has this progress benefited you as a manager when looking for talent?

The staff scouting process is considerably easier with regional leagues being the first port of call for potential players. Each of the Regional League administrators plays an important role in highlighting new talent, bringing these to the attention of the National Development Squad staff for consideration. We also drop into all of the Leagues and have a look for ourselves and we utilize the network of SFA regional managers to bring potential players to our attention also who may not necessarily be involved in the Leagues.

In your BBC interview, you mentioned that the Scottish National Futsal team now comes under the Scottish Football Association’s Performance umbrella, headed by Brian McClair. Did Brian attend the recent international matches and what is his attitude toward the sport?

Brian came along to the game on Thursday and Jim Fleeting, Director of Football Development attended on Wednesday and hopefully as the Scotland Futsal Head Coach, both will have seen a positive representation of the SFA Futsal programme by the team.

As Scotland Futsal Head Coach how do you hope to progress the squad further after this victory? And what positive and negatives did you take away from the match and your squad’s performance?

No-one within the squad, staff or players, are under any illusion of the size of the task ahead of us. Getting a couple of well-earned wins against a technically very good side demonstrates that we can compete at this level, albeit outside of the main group of teams in European and World Futsal. Futsal, like all sports, is about finding your level and I’m sure both Scotland and Gibraltar would aspire to climb the rankings in future years. Once we get an official UEFA/FIFA ranking, we can assess what we feel is achievable and set our plans accordingly.

I was extremely pleased with the way the team went about overcoming the three-goal deficit in the opening match. They demonstrated great character to come back from a poor start, showed an ability to change the tactical approach to the game and I was delighted with the physical fitness we displayed. In the second match we approached the start of the match differently again (with new players) and showed that we could hold on to a lead and compete physically.

21 of the 22-man squad played (with one injured unfortunately) so we got a chance to assess all the squad in a competitive environment. None let themselves or their colleagues down. There were a couple of negatives, but we know what they are and we’ll work on these in future sessions as part of the learning process. On the whole though, nothing should take away from the achievements of this group of players who should be extremely proud of how they performed last week.

What are the Scottish FA’s plans to develop the sport further? Celtic has amateur teams in amateur competitions in Scotland, are you approaching the professional clubs to get them involved in Futsal?

In partnership with the Scottish Futsal League there is an ongoing programme of activity to grow the adult game. Anyone is free to join the League, from whichever level of football and obviously this means dialogue with the players and clubs. The SFL will look to work with the SAFA to organize and manage “age-group” competition alongside the regional “adult” leagues, but this will require review and agreement with the governing body. Developing a higher level competition for the stronger teams should also help bring more experience to players eligible for the national team, but again, each step on the journey has to be planned and sustainable.

The SFA have been working with the Pro-Youth Clubs in running Futsal activity.

What are your own development steps as Scotland Futsal Head Coach that you want to take away from these victories to help you and your team develop further?

The futsal family has always been an excellent source of knowledge and support without which these achievements would not have been possible. I owe much of my development to great people with considerably more experience for whom I have tremendous respect from both the futsal and football world. Continuing to seek out the guidance and expertise of coaches from the futsal family and from within the national football association provides a balanced approach to personal development. I believe it is important we as coaches equip our players to make positive decisions for themselves in the cauldron of competition, and by giving them a broad knowledge of the sport we enable them to select from these options to create the best outcome. Playing games, learning from victories and defeats and providing the knowledge to create solutions will help the team develop.