The prestigious Series Futsal Australia tournament will be fought out in West Australia for the first time this October.

Having been held at the famous Futsal Oz stadiums in Melbourne since the competition’s inception in 2012, the Series Futsal Australia Cup will be played at the Western Australian State Futsal Centre in Bibra Lake, south of Fremantle, on October 7-9.

The cup (formerly known as the Futsal Oz Australian Futsal League or ‘FAFL’) is traditionally held each April and September, but due to the FIFA Futsal World Cup in Columbia this September, Series Futsal organisers have elected to hold the cup back a month to allow players from the Australian and other international teams the chance to play for their Australian clubs. 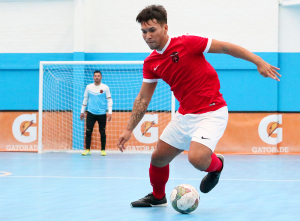 “Our partners in West Australia have been involved in Series Futsal Australia since Day 1, so it’s fitting that we take this great tournament over their home ground this October,” said Peter Parthimos.

“And it’s a timely coincidence that we play at the home state of reigning Series Futsal champions Claremont Cambio Cumbre Futsal Club.

“All of the staff at Futsal Oz and Series Futsal are excited about the adventure over to Perth. It’s the next chapter in the professionalism of the sport.

“Our intention is to have at least one Series Futsal Australia held interstate each year, so we’re looking forward to seeing where the next one will be.”

The tournaments are held twice a year for men (April and September) and once a year for women (April only) and typically run over a three-day period.

The competition, for both Mens and Womens, are played for a cup – regarded as the most prestigious prize in the extensive Futsal Oz trophy cabinet.
FUTSAL OZ DETAILS:

Futsal Oz is the home of elite, social and junior futsal in Victoria and Australia.

With its three world-class stadiums in Brunswick, Mount Evelyn and Thomastown, Futsal Oz provides a safe and competitive way for everyone to enjoy futsal (a style of indoor soccer).

This year, Futsal Oz celebrates its 10th year of being a futsal organizer and provider to thousands of players.

For more on Futsal Oz, visit our website >> http://www.futsaloz.com.au