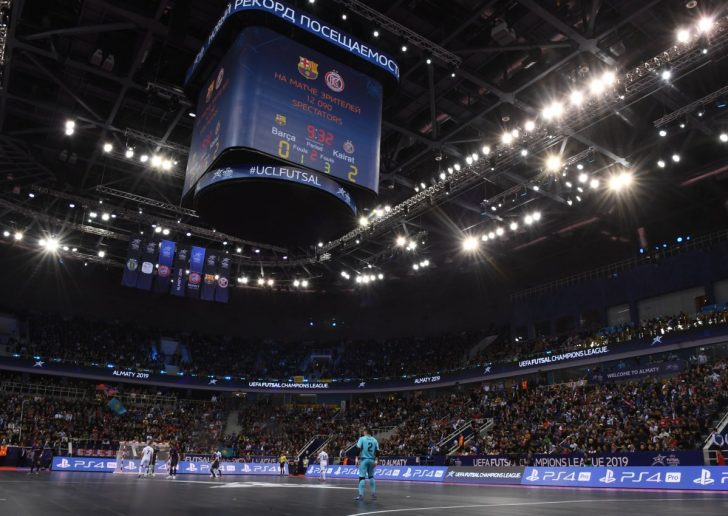 European club competition under UEFA has been organized since the 2001-02 season and Spain has been represented in the final 14 times out of 17 finals, the last time there was no Spanish club was in the 2012-13 final between AFC Kairat and Dinamo Moskva. During this period, Europe’s top competition has been known as the UEFA Futsal Cup but for the 2018-19 season, UEFA announced that the competition was being rebranded as the UEFA Futsal Champions League.

On Sunday at the final of this historic occasion, there will be no Spanish representation in the Futsal Champions League final. Last year’s champions Inter Movistar and Barcelona Lassa suffered heavy defeats to their opponents. Therefore, this year’s final will be played by Sporting Clube de Portugal and AFC Kairat. Inter Movistar and Barcelona will compete for third and fourth place.

Sporting Clube de Portugal who lost to Inter at last year’s final 5-2, got their revenge this time around by winning Friday’s semi-final 5-3 whilst AFC Kairat ensured their place in the final by beating Barcelona, 2-5.

If you have never seen futsal at the highest level and you are wondering what to expect if you watch tomorrow’s final then check out last year’s highlights:

If you are wondering where you can watch the final and third-place match. You can watch the UEFA Futsal Champions League finals across Europe and the world thanks to UEFA’s broadcast partners and the live streaming of games on our YouTube channel UEFA.tv.

In territories where there is no broadcast coverage listed below fans can stream every game live for free via the UEFA.tv channel on YouTube. Highlights of every match will also be available on UEFA.com and UEFA.tv as of midnight CET after each match day in all territories.