During the second weekend of July 2019, Chile’s football association (ANFP) once again showed its commitment to futsal development by organising two events vital to the future of the discipline in the country.

From 8-12 July, first, and from 14-16 July, the ANFP held two courses for the licensing of futsal coaches: an A license course for elite competition, and a B license one for youth futsal. In total, 60 people took part.

In between, on Saturday the 13th, the association also staged Chile’s first International Futsal Congress. The event was attended by 90 people, who got to hear first-hand about the experiences and cases of prominent figures within the specialty.

Both initiatives counted on the support of FIFA through its FIFA Forward Football Development Programme and its beach soccer and futsal development department.

Brent Rahim, head of the department, explained it like this: “Our role at FIFA was to help bring about the A License course and to attend the congress to provide an overview of global futsal development.

“In 2011 and 2016 we conducted two surveys to analyse the growth of the sport, and we think it is essential to share the results in this area.” 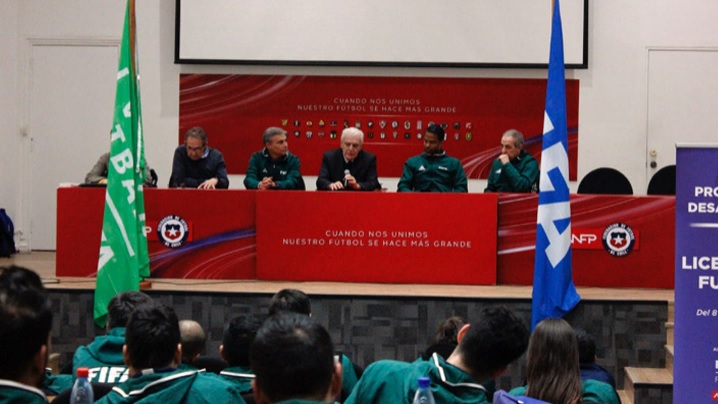 Chile’s ambition
The nine days proved very advantageous for Chilean futsal, according to Vicente de Luise, the Argentinian who coaches the Chilean national futsal teams and is leading the ANFP’s efforts in this discipline with the support of the National Institute of Football, Sport and Physical Activity.

“The courses were a success. With [the support of] FIFA’s Forward programme and CONMEBOL’s Evolution One, we added to the 120 hours that CONMEBOL require for each license, a further 40-hour FIFA course given by Miguel Rodrigo of Spain for the A license. And for the B license course, we added an extra 24 hours, which we taught together with Murruga of Brazil and Ruben Subeldia of Paraguay.”

“Futsal was late coming to Chile, which is why every step forward is crucial,” continued De Luise, who played an important role in the development of futsal in Argentina, the home of the current world champions.

“The experience has been fantastic in terms of our overall plan. Taking advantage of their presence here for the courses, we gathered instructors from Europe and South America for a congress that generated attention, not only in the capital of Santiago, but also in other regions.”

During the congress, each exponent focused on a specific topic:

Source of the article: FIFA