Can Futsal become the heart of the Small Sided Games approach? 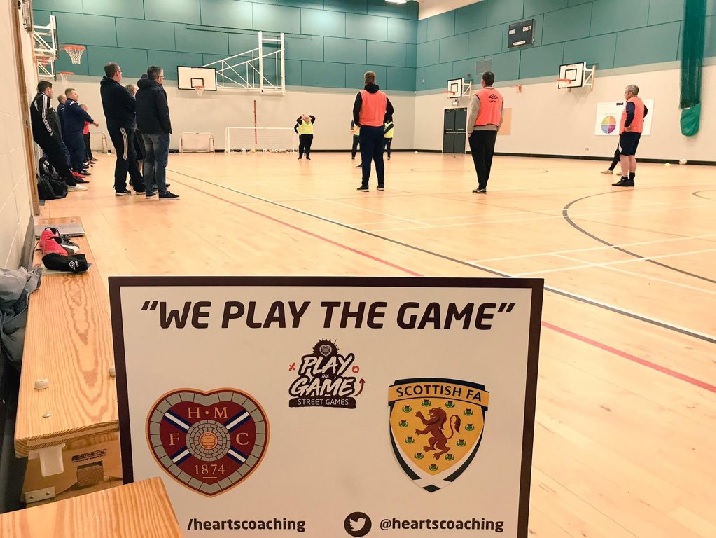 The author of this article ‘Can Futsal become the heart of the Small Sided Games (SSG) approach? #Letthemplay’ is Martin Myers. Martin is an experienced and passionate Coach and Administrator, he works with colleagues as co-founder of Futsal Scotland, providing high-level Futsal activity both nationally and internationally. 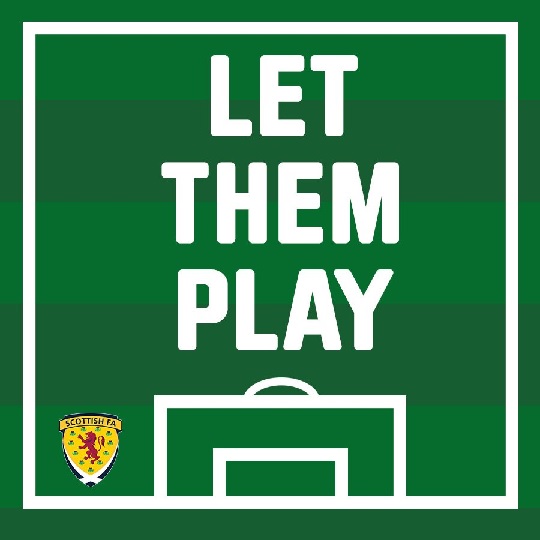 CAN FUTSAL BECOME THE HEART OF THE SMALL SIDED GAMES APPROACH? #LETTHEMPLAY

This is intrinsically linked to the governing body and how they view, help and support futsal. First of all the sport needs to be recognized for what it is. Some level of Socratic debate would go a long way to do this but for those involved in the sport, the strongly held view is that in order to gain the full benefits of futsal the sport must be developed in its own right but through full engagement with governing bodies (football association’s). As it stands futsal plays no formal part of the SFA’s player pathway yet it’s the only small sided game recognized by UEFA & FIFA. 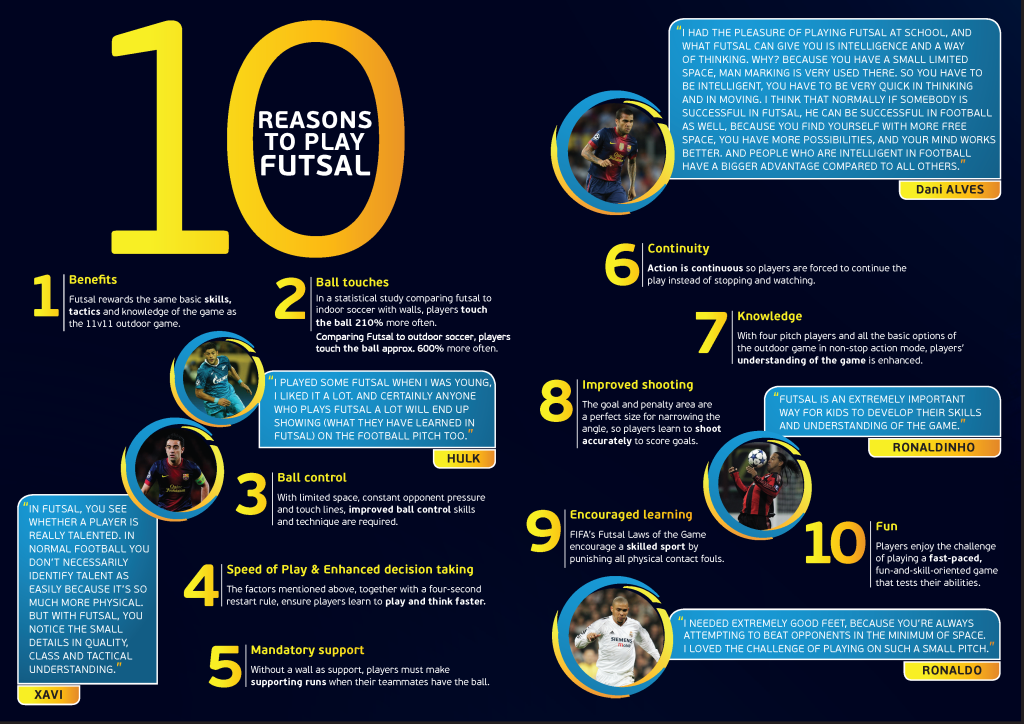 UEFA describes futsal as ‘Futsal is a collaborative/adversarial team game in which players are required to adapt to a changing, dynamic environment; one in which they have a restricted amount of time and space in which to make decisions and carry out actions that will provide solutions for their team. Futsal entails a high level of motor engagement and intense practice, with the tactical aspects (in terms of perception and decision-making) crucial to the effectiveness of each element of play’.

‘Futsal requires a high rate of active participation and motor engagement on the part of the players, which makes it an excellent means of developing skills among children. It enables them to stay constantly involved in the game – directly or indirectly – and build up the amount of time they spend engaged in useful practice (or intense practice), which is why the sport is also regarded as an excellent training tool for football’.

A huge part of the benefits of futsal is playing the game with the correct equipment, surface, laws of the game and allow these unique conditions to help develop the game and the player’s who embrace it. There are unquestionable transferable skills from futsal to football…just look at the top goalkeepers in the Premier League…and where do you think the strikerless formations came from – futsal 4-0…but for those involved in football it’s vital to understand that futsal USP cannot be compromised to shortcut success in the 11 aside games. 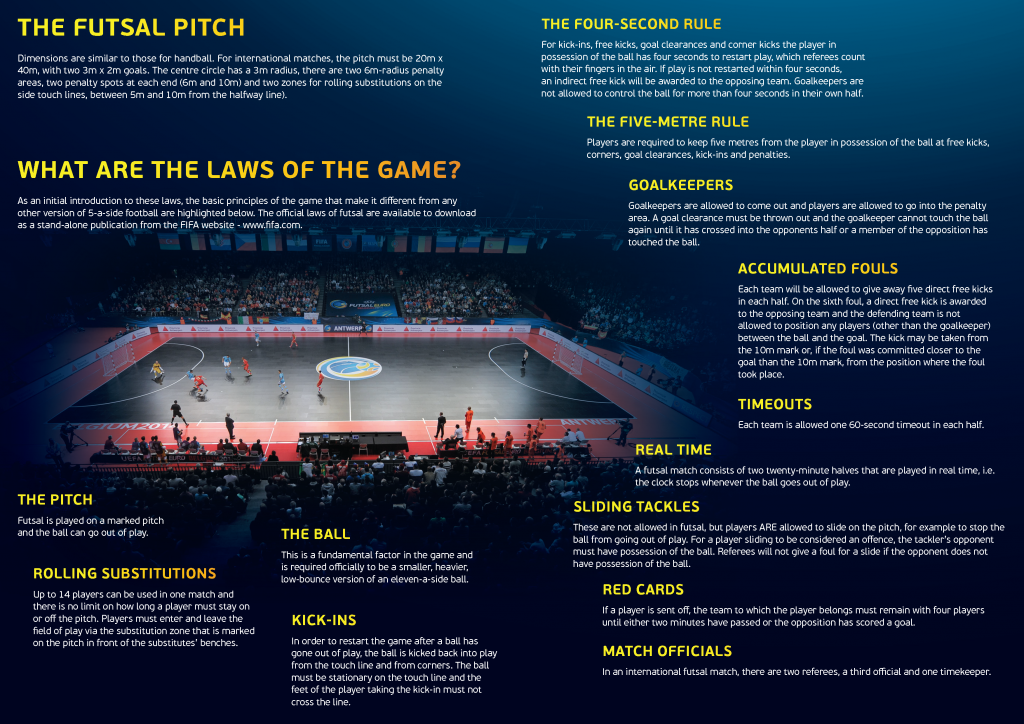 In Scotland, we’ve struggled to get futsal into the mainstream football family whether that’s the adult game through affiliated football or your ‘no whistle’ recreational SSG culture or the youth game. There’s a number of factors at play and there’s no easy fix but we do at least require a clear and consistent message from the governing body and an acceptance of where the sport sits under the UEFA and FIFA umbrella. By doing so it’s clear, through world governance, that this is a form of small sided activity that should be supported, promoted and attributed funding. You could argue that associations should have the freedom to develop their own pathways (4’s, 5’s, 7’s and 9’s) but there certainly shouldn’t be in direct competition with the affiliated pathways. Yet as it stands we’ve yet to see if/when futsal will fit into this.

We’re now at the start of the small-sided game season in Scotland and of course, there’s a huge buzz around. Most young kids have been without affiliated football through the winter. You could ask why a small sided indoor game isn’t deemed a viable option through this period? Small-sided games (SSG) have been used as a reliable method to improve learning in team sports since it allows the simultaneous development of technical, tactical and physical capacities of players through the manipulation of tasks constraints. But what is the best SSG approach? If, as it seems, we’re happy to adopt this approach then should we adopt the only recognised Small Sided Games or can we adopt other influences?

I’ve noticed recently a number of people prominent in the development of the game in Scotland promoting a programme looking to return to street games, small-sided activity with the ideology of #letthemplay. This appears to be a flagship programme attached to the move to let them play. Tagged to the programme are a list of benefits.

I decided to attend the CCD on small sided street games. 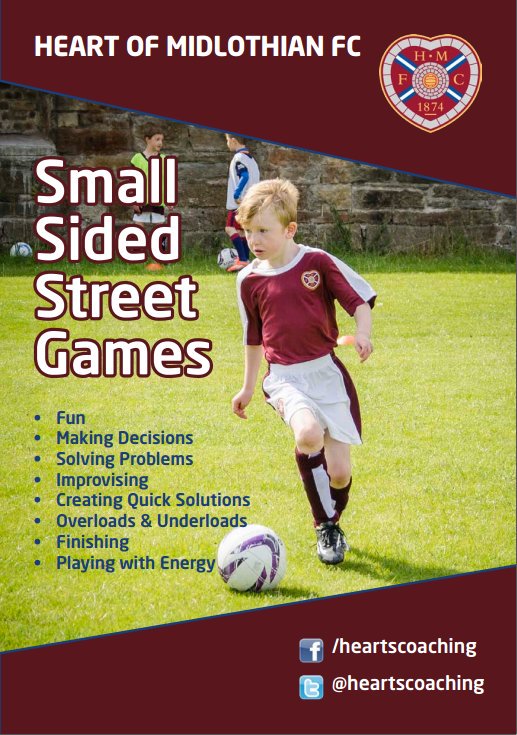 The first part was discussing a well thought out presentation with the aim of making a case for returning to a more game based grassroots approach.  The message seemed to be to move away from the drill based sessions to get kids playing and allow the game to teach.  We were given evidence from player’s of how much game time they had how this was broken down into categories of play.  We saw graphics showing players of yesteryear, current pro-youth, and grassroots players.  It was a very compelling case down to hearing Brian Clough’s training regime was high intensity 5 a side.  It showed how player nowadays has less unstructured game time and I think we can all accept society had changed and contributed to this.  We weren’t given details if grassroots players have less structured game time which would have been interesting to see after all that’s the bit the governing body can most effect.  The data clearly showed the modern trend of kids playing less football overall so I thought at this point perhaps the Idea of the programme is to empower coaches to encourage player’s to play more unstructured football and example ideas of how they can do this?  Kerby, header’s n volleys, etc.  Play on the street, play with older boy’s, younger boys, girls, and boys….Let them play!

Moving onto the practical session it was clear that these were all small sided games for grassroots coaches to implement at training rather than an unstructured game time for players.  This seemed a little at odds with the part of the message from the presentation. The #letthemplay ethos was very evident from the delivery and coach interaction whereas the street football less so as there appeared no tangible link.  The content delivered was very engaging and clearly enjoyable for everyone participating but to me, this was very clearly futsal influenced games being played on astro.  In fact, some of the activities look familiar to content you can find in the UEFA Futsal coaching manual.  The penultimate activity resembled a game of futsal with 3 sets of 4 outfield teams alternating game time.  All that was missing were the unique conditions that make futsal the game it is and by removing some of these conditions (hard surface and ball for example) the game is slower and so removes some of the organic learning of the game.  It’s worth pointing out that the small sided street games programme is also run indoors on a hard court.

But is it the right game?

I was left wondering why, despite all of the obvious correlations to futsal, it was, in fact, street football being used as the inspiration? We did, after all, see a version of futsal inspired 5 v 5’s or as Brian Clough would say high intensity 5’s – no walls or boards but a delineated court and subs being used. There was little evidence of any street influence other than letting them play without coaching interference allowing the game to teach but that’s nothing new to a futsal coach using an SSG format to present problems that players need to solve – but vitally under the pressure of a game environment and not manipulated or limited by a coach. If this is, in fact, the motivation, to provide an SSG’s approach that lets kids play and learn from the game, then should we be looking at the game that best creates this environment? 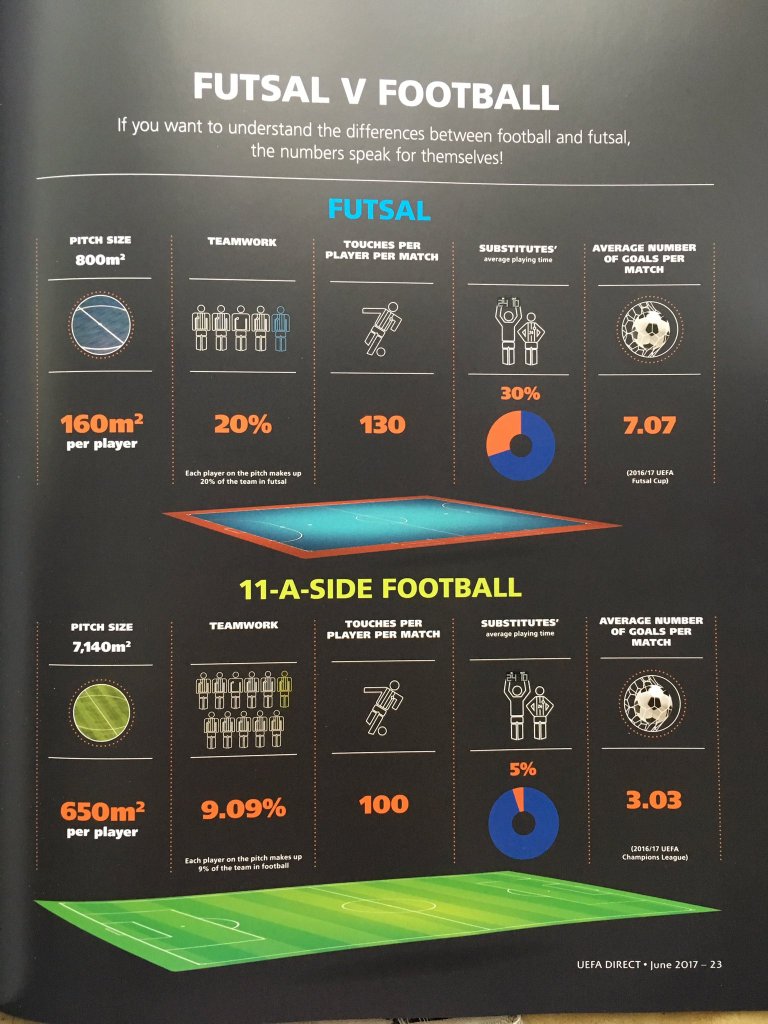 It would be interesting to see what the data tells us about how best to put Small Sided Games at the heart of grassroots activity. It would be worth anyone interested in this subject to review Italian Ph.D. student Luca Oppici UEFA funded study looking into the “Transfer of skills from futsal to football in youth players”. The findings are very interesting and point towards a positive influence of futsal upon player development and a natural improvement on football players who’ve played futsal. What is clear though is that in order to gain the full benefits players must be exposed to the sport of futsal and not an adapted version which includes sufficient time and resource put into the development of the basic core individual technical skills. As Graham Dell said in the recently published report from FIFA on the 2018 youth Olympics “The report shows that for boys and girls to enjoy futsal at any level, they must first possess basic technical knowledge, and only afterwards must complex tactical approaches be applied to team play, since the two facets are intrinsically linked.” 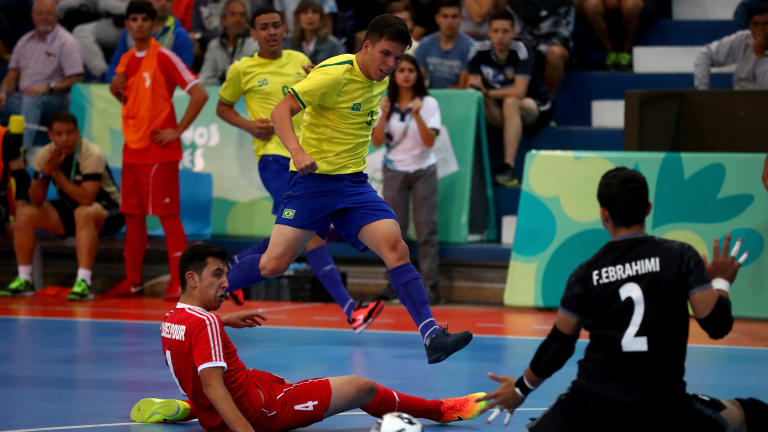 I wonder if ultimately logistics and cultural factors have influenced the approach? By presenting the street as the influence we’re removing barriers from the grassroots game to easily adopt the approach. If futsal was brought into the equation we’d immediately need to educate the audience and give consideration to roll out but is that sufficient justification to ignore the benefits of futsal? In a let them play environment futsal could thrive and we saw that from the game’s in the CCD. We were given an example of some of the programme content being delivered to professional footballer’s who commented that they loved the opportunity to play in game’s that exposed them to different roles, different challenges, different problems to solve. Imagine the reaction to a game of futsal with those same experiences but far greater speed and intensity. 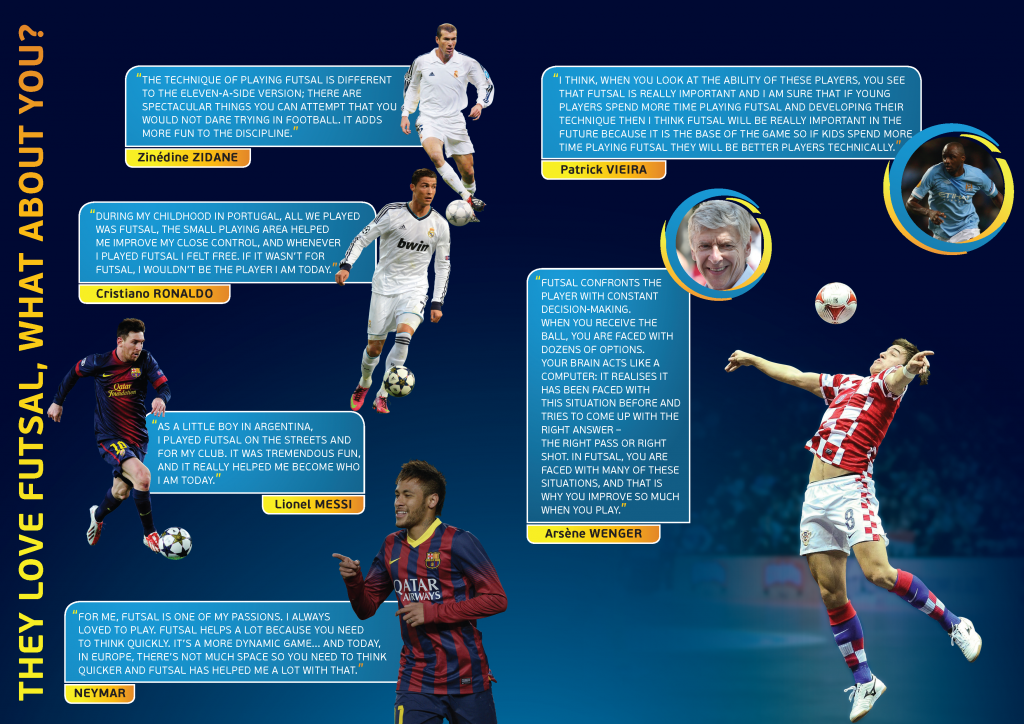 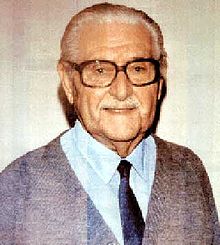 The game of futsal created by Juan Carlos Ceriani in the 1930s.

It seems that the CCD programme could have been geared towards opening futsal to the full cross-section of grassroots football in Scotland especially as sessions are run indoors on a hard court. The Fun, making decisions, solving problems, improvising, creating quick solutions, overloads and underloads, finishing and playing with energy are all attributes from the game of futsal – the game created by Juan Carlos Ceriani in the 1930s borne from a requirement for an alternative game format to meet social and environmental demands of the day. The game took influence from handball, basketball, hockey amongst others so it’s diverse beginnings lend itself to be a multifaceted, dynamic and challenging SSG.

If futsal was identified as part of the approach (in lieu of street football) and put forward as the flagship #letthemplay SSG then the 60 odd people plus the hundreds of others who’ve attended the CCD would have an awareness of futsal’s existence and have an opportunity to learn of the sport and its merits as a player development tool. I can see more merits in supporting and advocating futsal than the street game’s as futsal can provide analytical data on its benefits, is governed under FIFA rule book and has a pathway leading to the world cup final – wouldn’t that be a good motivator?

I would say that the CCD was well considered, well presented and delivered with good content but with reference to the original question….Can futsal become the heart of the Small Sided Games approach? Not if we can’t even accept its very existence.