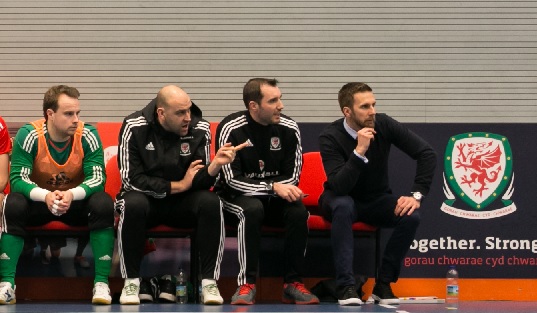 Wales Futsal head coach Richard Gunney is delighted with his squad’s progress despite narrowly missing out on the next qualification phase for the UEFA Futsal EURO 2018.

Wales finished second in Group B, with group winners Moldova going through to the next round after winning all three of their matches.

Despite a 6-1 defeat to Moldova on the opening night in Hereford, Head Coach Richard Gunney’s side bounced back with a thumping 8-1 victory over San Marino before rounding off the campaign with an entertaining 2-2 draw against Greece.

It followed the victory in the inaugural Futsal Home Nations championship back in December and Gunny was delighted with the progress shown in a short space of time.

“The boys put in so much effort and worked very hard – I was pleased and proud of them all,” he said.

“We had ambitions to win the group, but our understanding of the game and our quality is improving all the time.

“We’ve now lost once in six games and from where we have come from, that’s an impressive turnaround.

“We were disappointed that we didn’t get closer to Moldova in the first game, but we were very convincing against San Marino and we were pleased to finish second in the group.

“We’ve made more progress and that means better ranking points.”