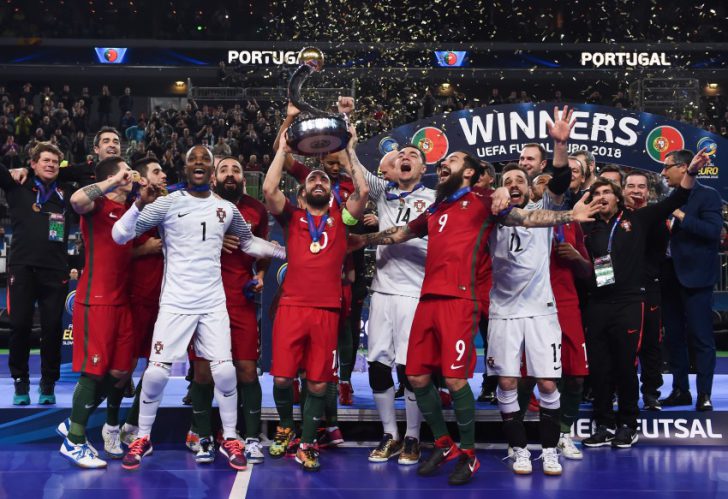 Vic Hermans and John de Bever to do the draw and only 100 days left until the start of the biggest European Futsal event ever!!

Today, UEFA announced the official news that one of the greatest Futsal players ever, Ricardinho (Ricardo Filipe da Silva Braga), is coming to the Netherlands on October 18 for the official draw of the UEFA Futsal EURO 2022. The current European Champion was in Lithuania last week with Portugal where he won his first world title and was voted the player of the tournament. The Portuguese player, also known as ‘The Magician’, has already been voted the best Futsal player in the world six times and is coming to Zeist for the official trophy presentation.

Vic Hermans and John de Bever to do the draw

Two of the Netherlands’ greatest Futsal players, Vic Hermans and John de Bever, will take care of the drawing for the groups on 18 October. Vic Hermans played 45 international matches for the Orange squad, and was the national coach from 2001 to 2009. At the 1989 World Cup in the Netherlands, he won a silver medal with the Netherlands and was voted the best player of the tournament. The Federal Knight is honoured to be allowed to draw the groups in Zeist: “It is great that after thirty-three years a final tournament is taking place in the Netherlands, and we can welcome the top European nations to Amsterdam and Groningen. Extra fun, of course, to be able to draw the group lottery in your own country.” John de Bever, who can still be found in the hall every week, scored 18 goals in 28 Internationals with Orange, and is also looking forward to the European Championship and hopes that the tournament will boost the growth of Futsal in the Netherlands.

The draw is hosted by Soufiane Touzani and Rocky Hehakaija. In addition to the three Futsal legends, they also welcome the children’s mayors Dominic (Amsterdam) and Samuel (Groningen). Writer Frank Heinen looks ahead to the tournament with a live performance. The draw can be followed live on Monday, October 18 from 6 p.m. via uefa.com/futsaleuro.

100 days until the start of the European Championship

The great countdown to UEFA Futsal EURO 2022 has begun. One hundred days to go and then the 11th edition of the European Futsal Championship will begin in Amsterdam (Ziggo Dome) and Groningen (MartiniPlaza). UEFA Futsal EURO 2022 kicks off on Wednesday 19 January. The final will take place on Sunday 6 February and it will be announced who can call themselves European champions for the next four years. Ticket sales for all matches will start a day after the draw on October 19. Tickets are available from € 10,- via https://www.knvb.nl/futsaleuro.