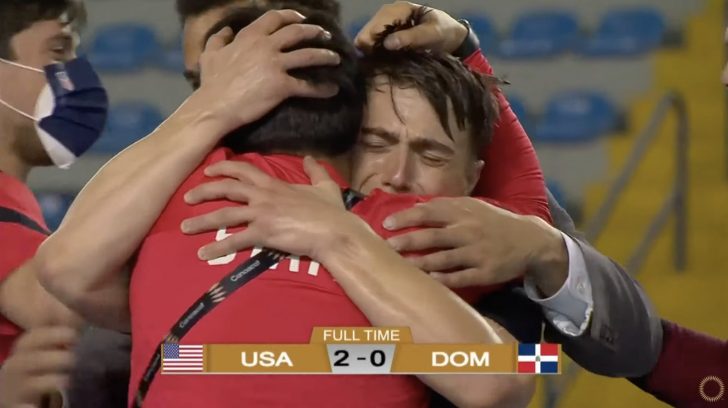 I woke up this morning to interesting messages from followers of Futsal Focus who were commenting on a few of Futsal Focus’ articles and posts across social media concerning the CONCACAF Futsal Championships which are taking place in Guatemala.

The points made were mainly of a negative perspective concerning the standard and quality of the teams. More than a few felt this was the only reason that nations were performing better against other nations who normally dominate the region’s futsal international stage because their standards have dropped in CONCACAF. In particular, this was also a reason given by a few concerning U.S.A qualification to the world cup, a nation who had been on the fringes of international futsal for 13 years. In addition to these comments, I watched the World of Futsal live podcast  today with host Keith Tozer (Former Head Coach of the US National futsal team), Kris Fernandes from Futsal Canada, and Constantine Konstin the head coach of Trinidad & Tobago (Who coached at the competition). Who made similar comments in relation to the performance quality of the teams dropping in comparison to past competitions.

I chose this title because I think we need to ask ourselves this question when we look back on the competition, and although both may be true, which had the bigger impact for the sport?

Now, everyone watches futsal from their own outlook/ thoughts on the sport, but Futsal Focus looks at it from a media, promotion and development perspective.

Let’s dive into this, so If we look back as far as the 2004 CONCACAF Futsal Championships, the nations who have dominated the regions slots at the World Cup since then have been:

At this year’s competition, Cuba are out, Mexico as well, Guatemala were close to defeat against El Salvador, Panama could have lost their place to Canada in the penalty shoot out. Only Costa Rica has been consistent out of these five nations. Now, let’s take in the obvious, we are in the middle of a pandemic, these teams have not been able to meet up very much or have many preparation games so would this affect the standard of their play? Especially when you are trying to get players who in many cases are new additions to a squad or the squad is to a large extent entirely new, of course it will (When it comes to CONCACAF, and its support for the sport, we will look at this further into the article).

Since, the competition kicked off, to answer the people who contacted me, did I notice a drop in the performance standard in comparison to the previous competition? Of course I have. However, at the same time, have I missed one match since the competition began? No, I haven’t. I have been clued to my TV,  sitting up to the earlier hours of the morning in Ireland watching every game. It has been so enjoyable, because besides the teams that face Costa Rica, it feels like every match, for the first time, in a long time, anyone could win, and that makes this CONCACAF Futsal Championships, in my opinion, the best competition I have watched in a very long time. Therefore, for novices to the sport in the region, and outside it, seeing all the goals, I would imagine this would be very entertaining. Reminds me of the Gladiator clip haha.

Will these nations have a big impact on the World stage in Lithuania? I doubt it, and yes improvement is always the goal. However, igniting the interest of the region’s countries due to a rare competitive balance change in this year’s competition may just be what the region needed. The picture below from the Trinidad & Tobago press in a nation still learning about futsal, they loved the national team’s performance despite their defeats in the competition: 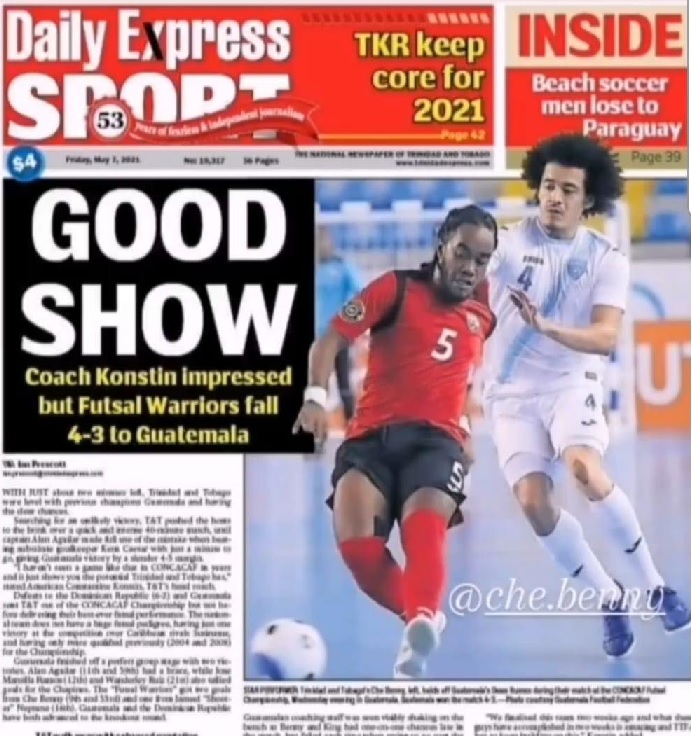 What could this competition mean for futsal development?

The outcomes from this competition,  of which a few below are points made by Conny in his chat with Keith and Kris:

Outside of the above is the impact this competition could have for futsal in the region as a whole due to the U.S securing qualification. Now, you could argue, they have qualified before and it didn’t make a difference but this is a different time. All the hard work of so many, for many years is starting to catch fire. As I type these words, I can feel the excitement in my fingers, the joy each word I type brings to my face due to the explosion of interest in futsal now in America, which was happening before this competition, and how the success of the national team on the court is going to help futsal development in the U.S even more.

Futsal Focus has been speaking with organisations and individuals across the United States frequently and the time is coming for futsal in America. I am not even American and I am so proud and delighted for the coaching staff and the players because they have made history. History, not just for their country’s international record or in the competition, but for the sport’s development in America and the region. The next 5 years are going to be very exciting.  Furthermore, you can start to see the increase in promotion by US Soccer via their website and social media channels in comparison to previous years. Prior to the competition, U.S. Soccer President Cindy Parlow Cone visited the US national team before the group departed for Guatemala, some of you might think this means nothing, but that couldn’t be further from reality. This is recognition, and the team’s success will be further recognised. Currently, their Head Coach Dusan Jakica is in his role part-time, could success on the court see him be given the role in a full-time capacity? Could his ideas for development be heard? We will have to wait and see, but success on the court strengthens his position and makes such developments possible. 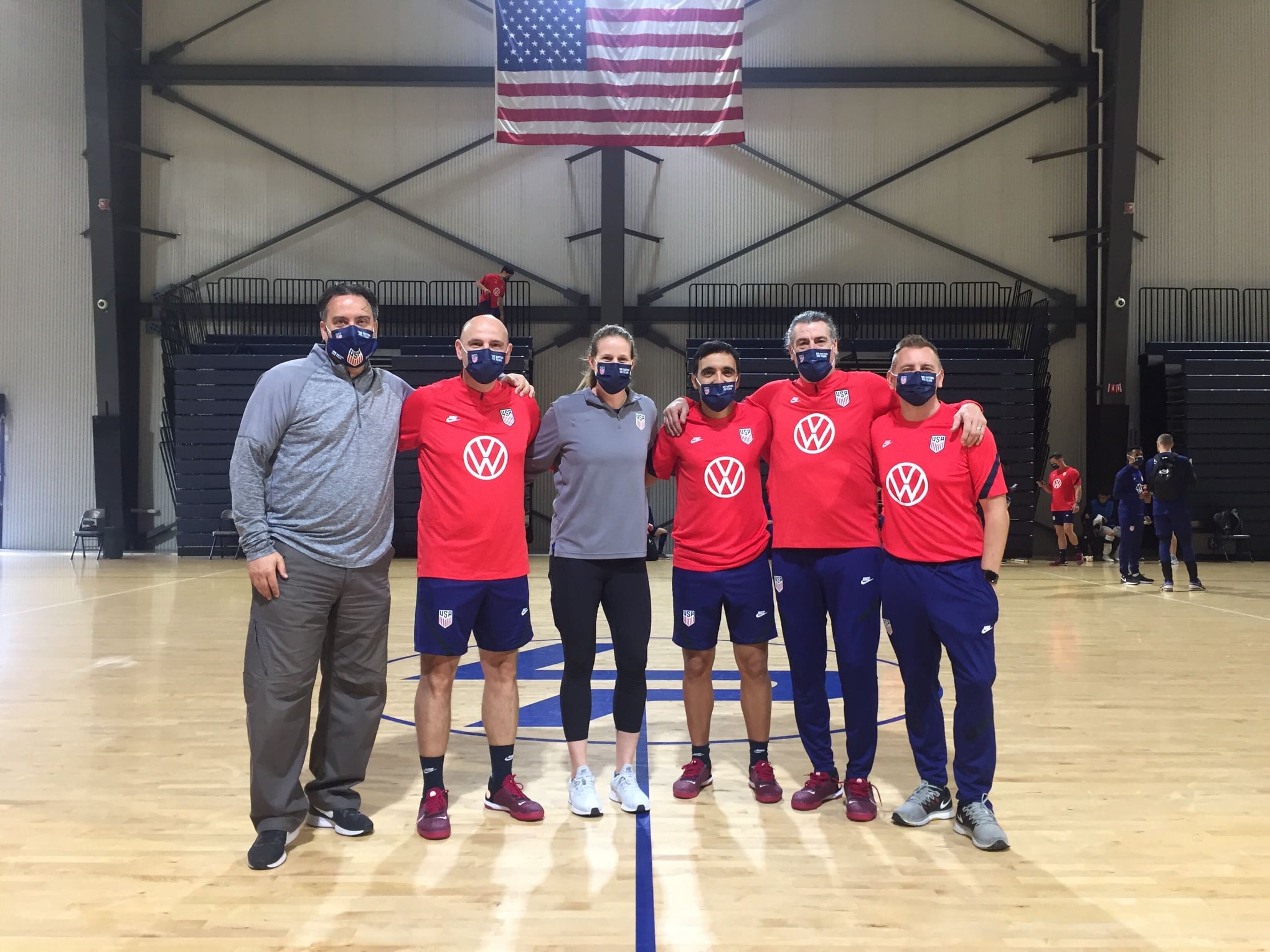 After the nation confirmed their place in the 2021 FIFA Futsal World Cup, the U.S Soccer Facebook page posted a message from the U.S Women’s National Football Head Coach Vlatko Andonovski congratulating the players which is further recognition for their success:

Should the national team defeat Guatemala and reach the Final, without a doubt you will see even more credible people recognising their national teams success by U.S Soccer across their website and social media channels.

Before, the competition kicked off, we spoke to coaches and administrators from:

A consistent point across these interviews (which you can read by clicking on them) is a constant frustration with CONCACAF and its support for futsal development in the region which Conny touches on in the World of Futsal podcast. The lack of investment and development in the region may be showing in this competition despite COVID and if this is the case, CONCACAF clearly need to do more to assist the sport and its development. We also wrote an article about ‘the importance of world cup qualification to the United States of America’ , and I truly believe, we are watching a tournament that will see a turning point in the development of futsal across the region. I say that because America is one of the largest nations in CONCACAF, if they embrace futsal, Canada will, if the US and Canada do Mexico will and the domino effect continues.  You are watching history in the making so sit back, put your feet up, turn on the matches and enjoy because like the futsal legend Mico Martic would say Futsal is here, and as Futsal Focus says Futsal And Proud.

You can watch Panama take on Costa Rica at 10 pm tonight in the U.K and the  United States face hosts Guatemala at 1 am via the CONCACAF Facebook page or their App on PlayStore. In the meantime, watch former U.S Head Coach Keith Tozer, Kris Fernandes of Futsal Canada and Trinidad & Tobago Head Coach Constantine Konstin discuss the competition so far, CONCACAF and the semi-finals on the World of Futsal below: