Exclusive to Futsal Focus: Why we left the Slovak Extra Liga, Pinerola 1994 Futsal 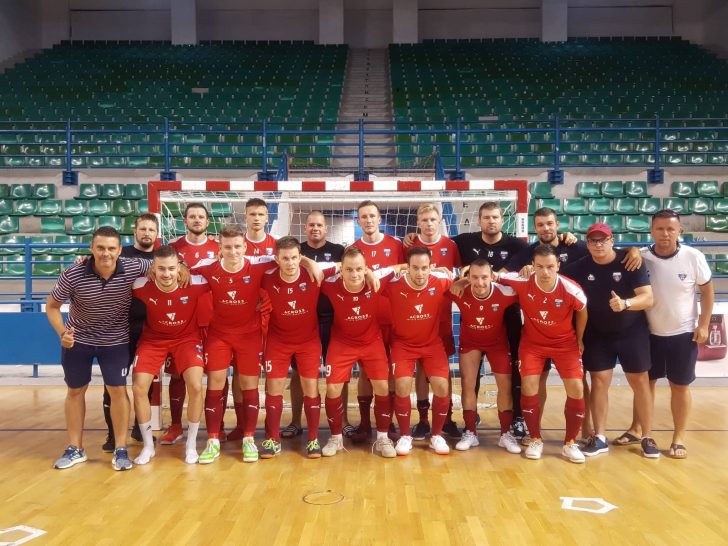 Recently, Futsal Focus saw the announcement by Slovakian club Pinerola 1994 Futsal (who competed in this year’s UEFA Futsal Champions League preliminary round) that they were withdrawing from the Slovakian National Futsal League, Slovak Extra Liga. To find out more, Futsal Focus got in contact with their general manager, Vladimír Ambrozek.

Before we discuss the situation at Pinerola 1994 and with Futsal in Slovakia, here is some information about Vladimir. From 1990 to 2005 he was a player for Tre Kronor futsal team (Third Division). Once his playing days were over, he moved on to be the Head of Online Marketing and the Technical Manager for the legendary Slovakian club Slov-Matic FOFO Bratislava from 2007 to 2015 but after two years he became their general manager. The club continued on as Slovan Bratislava which he stayed with for a short period though decided to take some time out of the sport. After a short 1 year break, he returned to the game he loves to be the general manager of Pinerola 1994 Futsal.

On Friday last week, the 6th September, sad news for the Futsal family was posted on Pinerola 1994 Futsal’s Facebook page concerning the club’s decision to leave the highest level of Slovakian Futsal, Slovak Extra Liga. The news came just after the champions had represented Slovakia in the UEFA Futsal Champions League preliminary round.

The main reason we choose to leave the league was due to the level of the competition and the direction the league is heading in. Last season, we won the league comfortably, we went unbeaten in both the regular season and in the playoffs. The season prior to this, Slovan Bratislava won the title, the successor to Slov-Matica FOFO who had won the title 13 times over the past 15 years. But, despite this success, they too decided to leave the league and now continue in the second division in Bratislava. After last season, the clubs that finished in third and fifth place decided not to continue, therefore, after long deliberation, we as the champions decided to do the same. Only 5 teams entered the league this season when the league once had 12 teams at a high level a few years ago.

For the first time in history, however, there will be no team from the capital of Slovakia represented in the league. Two clubs who were not promoted were included this season just to make sure the league continued. Although, the first round of fixtures showed the level the league is at when one of the clubs scored 15 goals against a team like this. A club who is nowhere near the standard that a club should be at especially when we promote the league as the highest standard of Futsal in Slovakia.

The president of Slovak Futsal has his own team in the league and he is the owner, chairman, and coach, we don’t have professional committee structures, proper governance and this is what we have been accepting until now. Could you imagine this happening in Spain, Italy, France or Germany, no way would this be allowed at the highest level.

A league needs professional governance structures, a business strategy, and the functions to support it such as a professional website which is regularly updated with the fixture and results. Marketing support to increase interest and awareness, business development, etc. The sport needs a development department for the referees, youth and coach education and the various other areas that make futsal a sellable product but all of this at Slovak Futsal are at a disastrous level. Futsal leadership has long been responsible for the declining numbers of clubs participating in the Extra Liga.

How can any club develop to the level its need to be so the sport can have an impact domestically to attract fans and business interest? How can players and coaches have a positive impact on the European or world stage for their club or country if the level of competition is not to the standard we need it to be? The competition and performance level has to improve but despite the time and efforts that everyone has put in from a club level we are not reaping the benefits and recognition at a larger national level.

The problem in Slovakia remains that futsal isn’t managed directly by the Football Association, but is led by Slovak Futsal. UEFA money can only be used for national teams and youth. There is a new law for sport in Slovakia which has complicated many things in our country and this is why the level of the league looks like this as well. To finance a club in Slovakia is a waste of time and money because there is no return in value.

In the past, when I was general manager for 13 seasons with Slov-Matic FOFO, nine times we advanced to the Elite Round of the UEFA Futsal Champions League. I organized an event a number of times in Slovakia at the Ice Hockey arena in front of 5,000 spectators commemorating 2015 when we beat the famous S.L Benfica 5:4 as means to raise money and to help keep the club going.  As far as I know, clubs are not getting any money to qualify for the UEFA Futsal Champions League.  The only money goes to a group organizer (52,500 EURO) and other clubs participating will receive a travel grant (10,000 EURO) all subsidized by UEFA. However, there is not enough money coming to clubs from the domestic competitions we are involved in nor from UEFA when you win a game or draw a match at the UEFA Futsal Champions League. You win 10,000 EURO if you qualify from the preliminary round and the main round but that doesn’t cover anywhere near the amount of money it costs to travel to the host nation and bring the number of staff along with the players that you need. This is an issue that UEFA has to look at as well.

Should the Football Association take over the organizing of the league, I hope to see workshops on every aspect of club business and clubs sharing information and showing best practice case studies which you see in others countries around us developing this sport.  In Slovakia, nobody is taking a leadership role and there is not enough money in our sport, that is the problem, but I hope in the near future this will change.

We cannot sit about, wishing for the day to come that the Football Association will step in, I mentioned the difficulties we are facing are due to a lack of leadership in Slovakian Futsal. Therefore, I intend to put myself forward as a candidate for the Slovak Futsal presidency and I want to bring the clubs together to address the issues we are facing and show the leadership this sport needs in Slovakia.